Khushi Kapoor recently took to Instagram to share a glimpse of her cuddle partner. She was seen carrying the cuddle partner in her arms and hugged it tight while she posed for the camera. Her post caught the attention of her fans and followers who couldn't help but shower her love in the comments section. Read ahead to know more about Khushi Kapoor's Instagram post.

In her post, Khushi shared a picture of herself in a pink t-shirt as she gazed at the camera. She opted for minimal makeup, silver earrings and left her hair loose. In the next picture, she was seen carrying her dog in her arms with its back facing the camera. She flashed a sweet smile and captioned her post saying, "Swipe for virtual cuddles". Her post was loaded with love in no time. 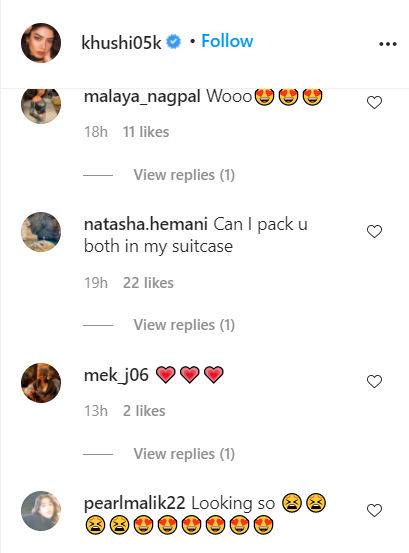 Looks like her pet is very close to her heart and Khushi loves spending time with it. She often shares pictures with her pet on Instagram. Earlier, she shared another post in which she was seen cuddling her pet while flashing a smile towards the camera. She wore a black full sleeves t-shirt and accessorized her look with a pair of butterfly earrings and neckpiece. She captioned her post saying that her pet was all she needed.

In another post, she was seen outdoors while she held her pet in her hand. She wore a navy blue two-piece dress and opted for silver looped earrings. She captioned her post saying, “Puppy love.”

A few days ago, Khushi’s father, Boney Kapoor had confirmed the news that Khushi was keen on acting and was going to mark her debut in B-town soon. Khushi's sister made her debut with 2018 hit Dhadak backed by Karan Johar's Dharma Productions. Last month, Khushi jetted off with Boney Kapoor to New Delhi while he shot for a film with Ranbir Kapoor and Shraddha Kapoor.