Unseen Pic Of The Day: When A Baby Riddhima Posed For The Camera With Father Rishi Kapoor

Riddhima Kapoor Saini recently took to social media to share a rare picture with her father Rishi Kapoor from her childhood to cherish his memories; see pic

The legendary actor Rishi Kapoor breathed his last on April 30, 2020, at the age of 67, and his untimely death amid the nationwide lockdown led to only a few people attending his funeral. Kapoor's beloved daughter, Riddhima Kapoor Saini too could not make it to her father's funeral as she resides in Delhi with her family. Ever since then, Riddhima has been frequently posting some unseen pictures with Rishi Kapoor to reminisce and cherish her dad's memories. Recently, Riddhima took to her Instagram story to share a rare photograph with late Rishi Kapoor from her childhood.

The veteran actor Rishi Kapoor was battling with leukaemia, a type of cancer for two years and passed away on April 30, 2020, at Mumbai's HN Reliance Hospital. While his wife and son Ranbir Kapoor were there by his side when he breathed his last, Kapoor's daughter, Riddhima Kapoor Saini was stuck in Delhi due to the travel restrictions imposed by the Government of India, owing to the Coronavirus pandemic. Therefore, Riddhima later expressed her grief by sharing a picture with her father to mourn his death. Ever since then, she has been digging up her gallery and sharing several unseen pictures with her fans on social media to reminisce all the days she spent with her father.

The fashion designer recently shared a streak of pictures with her maternal family on social media. However, along with pictures from her travel diaries with her dad, Riddhima also shared a rare childhood picture with Rishi Kapoor on social media and the father-daughter duo looked nothing less than adorable as they posed for the camera. Check out the photo below: 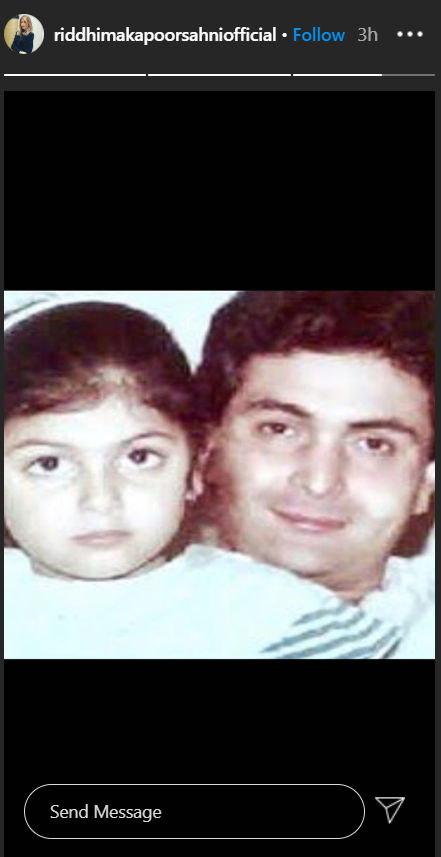 In other news, on May 10, 2020, Riddhi Kapoor Saini also took to social media to wish her mother, Neetu Singh on the occasion of Mother's Day. By sharing a throwback photo with her mom, Riddhima captioned the post writing, "Love & only love - Happy Mother’s Day Ma". Have a look:

A post shared by Riddhima Kapoor Sahni (RKS) (@riddhimakapoorsahniofficial) on May 9, 2020 at 10:48pm PDT