Singer Adele is having fun in quarantine while shedding extra kilos at home. The 32-year-old singer-songwriter recently showed off her recent weight loss once again in an Instagram post in which she appeared to be enjoying her time at home. In the two photos, the Someone Like You singer could be seen watching a recording of one of her famous performances on television. In the first, she fanned herself while wearing sweats and squatting near the TV. In the second blurred photo, Adele was seen dancing to the tunes of her own music and had donned the same dress she wore on television. "5 ciders in," she captioned the post,

In the comment section, several fans of the singer asked her about when the singer planned to release new music and got a cheeky response. One of the followers asked her about a new Teaser, albums coming out today to which the Rolling in the Deep singer mentioned ‘Not at all.’ She wrote that coronavirus is still not over and she is quarantining. Another user called her the best singer in the industry. Another user commented and wrote that Adele is like a dream for some. 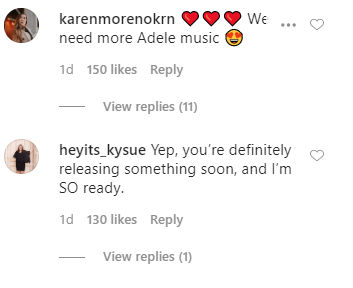 As per various reports from media portals, the weight loss journey of Adele was fuelled by various factors, which included her divorce as well. A media portal revealed that the weight loss transformation did not happen for the singer overnight. Reportedly, Adele finds it amusing when people think it just happened. The singer had started this journey slowly a couple of years ago and it was a gradual and healthy process for her.

As per reports, earlier this year, the singer appeared at a friend's wedding, where she performed, but also told the audience to expect her new album in September. The musician wasn't the first to change her music-release schedule because of the coronavirus outbreak. Both Lady Gaga and Sam Smith announced a delay in their albums.Gaga's album dropped last May and Smith has not announced a new release date. As per reports, many musicians have rescheduled tours and live performances, while massive festivals Stagecoach and Coachella were canceled for the year due to the ongoing global outbreak.

LATEST NEWS
View all
12 hours ago
What time does 'Japan Sinks 2020' release on Netflix? Check out date and time
14 hours ago
Matthew Perry reduces the selling price of his Batman-themed luxurious LA penthouse
56 mins ago
'Candyman' pushed to October, 'Halloween Kills' and 'The Forever Purge' delayed by a year
17 hours ago
Kylie Jenner vacations with a man and it isn’t Travis Scott, details inside
17 hours ago
Harry Potter Quiz: Can you name the characters based on these references?