Filmmaker Taika Waititi who won the Oscar for Best Adapted Screenplay for Jojo Rabbit was caught by actress Brie Larson as he was hiding the award. The filmmaker was caught smiling cheekily as he hid the award under the seat in front of him. Read what happened. 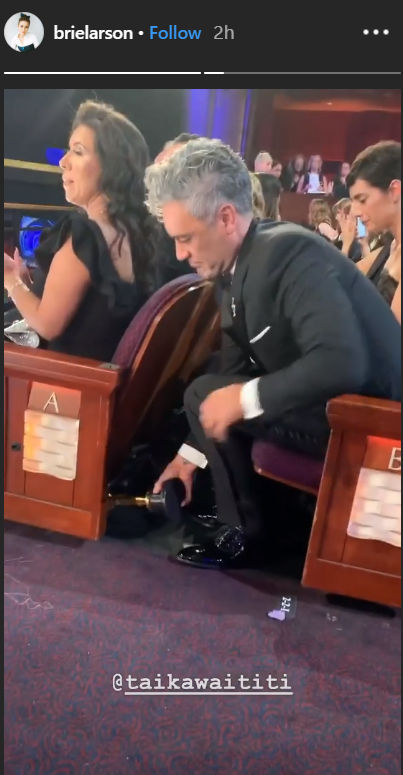 Taika Waititi putting his oscar under the chair is a mood. #Oscars

Jojo Rabbit is a comedy-drama film written and directed by Taika Waititi. It is based on Christine Leunens' book Caging Skies. Roman Griffin Davis portrays the title character, Johannes "Jojo" Betzler, a Hitler Youth member who finds out his mother (Scarlett Johansson) is hiding a Jewish girl (Thomasin McKenzie) in their attic. He must then question his beliefs while dealing with the intervention of his imaginary friend, a fanciful version of Adolf Hitler (Waititi). The film also stars Rebel Wilson, Stephen Merchant, Alfie Allen, and Sam Rockwell.

At the 92nd Academy Awards, Jojo Rabbit received six nominations, including Best Picture and Best Supporting Actress for Johansson. At the 77th Golden Globe Awards, the film was nominated for Best Motion Picture – Musical or Comedy and Best Actor – Musical or Comedy for Davis. It was chosen by the National Board of Review and the American Film Institute as one of the ten best films of the year 2019.