Courteney Cox Reveals Her Favourite 'Friends' Episode, Which Is Also A Controversial One

Courteney Cox recently spoke to Ellen DeGeneres in an interview where she revealed her favourite episode from 'Friends'. Read details below.

As a Friends reunion episode has been announced and will be shot soon for an HBO Now special, actor Courteney Cox, who played the character of Monica Geller has been rewatching the show. Courteney Cox was recently speaking in an interview with Ellen DeGeneres where she revealed that she has been rewatching Friends as she does not particularly remember the entirety of the series. During this interview with Ellen, Courteney Cox looked back at her memories with Friends and shared her favourite episode out of the entire ten seasons. Interestingly, her favourite episode also happens to be a controversial one.

Also read: Courteney Cox is binge-watching 'FRIENDS' like she does not "remember it at all"

Courteney Cox revealed that her favourite episode from Friends is titled 'The One with All the Thanksgivings', which is the eighth episode of the fifth season. In this Thanksgiving special episode, Monica Geller's character could be seen as an overweight young girl. In the interview, Courteney Cox described her character as 'Overweight Monica' and expressed that she felt free while paying that part. Assuming that the actor wore a bodysuit to look overweight on-screen, Courteney Cox revealed that she could just sit up and dance during the takes and have no problem with it at all. 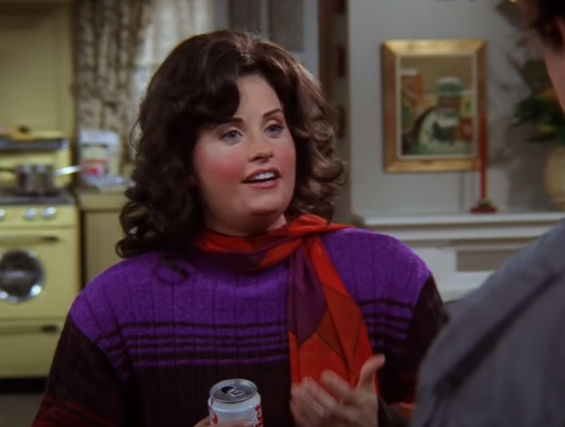 Her obsession with 'Overweight Monica' can be seen on her Instagram also as she has her display picture of the character. But, unfortunately, the character has not aged well amidst fans. Years later the episode aired on television, fans reportedly pointed out that 'Overweight Monica's concept was actually Fatphobic and demeaned overweight people. But despite the backlash, Courteney Cox has evidently not stopped loving the episode.

On the other hand, Courteney Cox has been sharing a number of posts on her Instagram, which she joined just back in 2019. Be it making dancing videos or singing with her daughter, Courteney has been making entertaining content on social media which is keeping her fans entertained. Check it out below-

PEOPLE HAVE PLEDGED SO FAR
LATEST NEWS
View all
1 day ago
Dakota Johnson picks 'Fifty Shades' co-star Jamie Dornan over his reel character in a game
1 day ago
Nick Jonas' week was all about mixed emotions; from celebrating love to mourning a death
7 hours ago
Josh Trank says it was inspiring' to work with effortlessly talented' Tom Hardy
1 day ago
Will Smith reveals he was 'anxious' about the role of Genie in the 2019 film 'Aladdin'
3 hours ago
Arnold Schwarzenegger shares workout video with pet donkey Lulu by his side; Watch