Kirby Jenner is a parody based account on Instagram who poses as Kendall Jenner's fraternal twin. Here are some facts about him and how Kendall feels about it.

Kirby Jenner is a performance artist who is well-known for his Instagram-based parodies. On social media, he poses as Kendall Jenner’s fraternal twin and has won nominations for Webby and Shorty Awards in social humour, best photography and parody accounts. The account is followed by many people owing to the fact of how skilled Kirby is in photoshopping himself in any picture with the Kardashians or Jenners and with perfect lighting, colours, shape, etc. Kirby Jenner has not only photoshopped himself with the KUWTK stars but has been able to put himself in their video footage as well. Read on to know some facts about his account.

Kirby Jenner has over 1m followers

Kirby Jenner joined Instagram in July 2015 and was first noticed by Youtuber and social media personality BroBible. By November 2016, he gained 439k followers on his social media account and currently is being followed by 1 million people on Instagram. He has been interviewed by several media portals and self-describes himself as an "amateur model".

In an interview with a leading media portal, Kendall Jenner had revealed that when she came across Kirby's parody account, she thought he was really talented and totally loved his account. She also said that she was surprised to see that a lot of familiar celebrities were already following him on his social media handle. Check out the video below.

Kirby Jenner posts photoshopped pictures of himself with the Kardashian and Jenners all the time. The account gained much popularity after BroBible, a Youtuber and social media personality discovered Kirby Jenner's account. Kendall Jenner is seen interacting with his account very frequently. Check out Kendall's comment on his picture below. 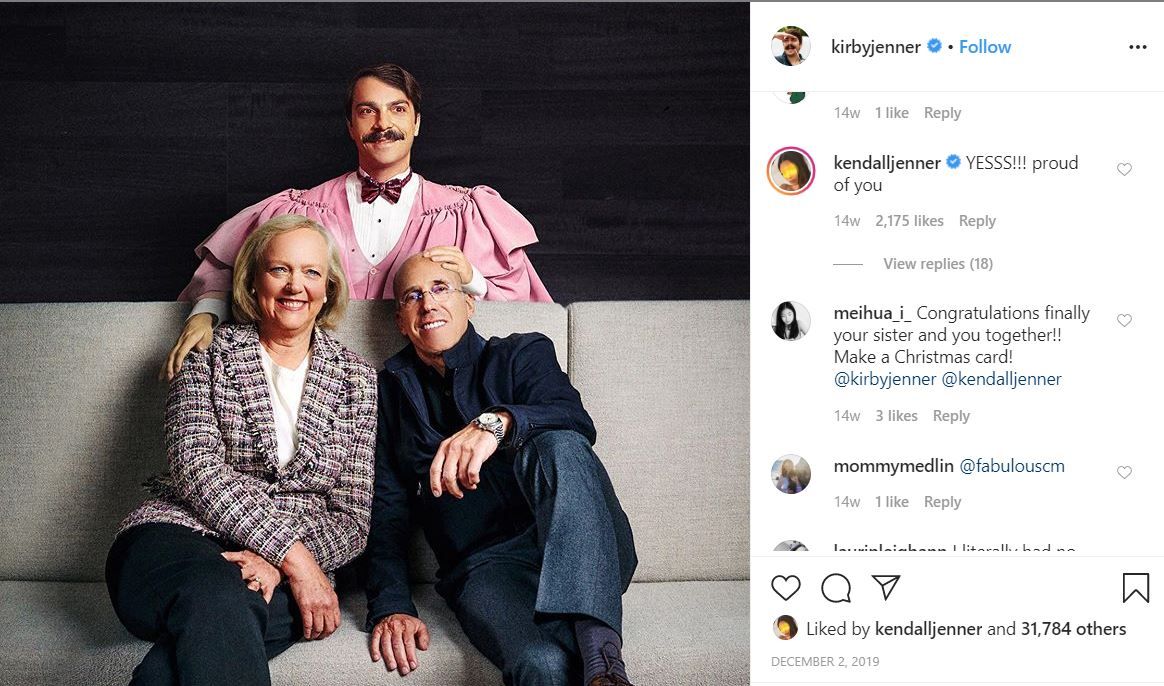 Read | Kendall Jenner Is Very Athletic Besides Being A Star Model; Here's Proof

PEOPLE HAVE PLEDGED SO FAR
Things Beyonce does on Sundays to relieve stress - From painting to pwimming
Lady Gaga apologises to Jimmy Fallon for an awkward interview; shares the reason
Benedict Cumberbatch shares a special message for his Indian fans amid COVID outbreak
Harry Potter fans react to JK Rowling's tweet about Alan Rickman aka Severus Snape
Rita Wilson opens up on why she fell in love with Tom Hanks
DO NOT MISS
5 MEN ARRESTED FOR BEATING ENGINEER
COVID-19: DOCTORS WRITE TO MHA
2ND COVID STIMULUS PACKAGE?
TABLIGHIS FACES CRITICISM IN PAK
RAJAPAKSA THANKS PM MODI
THACKERAY NOMINATED TO COUNCIL