Has Cole Sprouse found love again with Reina Silva after his split with Lili Reinhart? The duo was recently spotted strolling in Vancouver, Canada

Actor Cole Sprouse seems to have found love again after his split with Riverdale co-star and girlfriend Lili Reinhart. The Five Feet Apart actor was recently seen in a romantic outing with model Reina Silva. Cole's dating news comes after Sprouse confirmed his split from his Riverdale costar, Lili, on his Instagram account in August this year. The duo was recently spotted together in Vancouver, Canada and according to various sources, the duo seemed to be in a relationship. Take a look at some anonymous nuggets about the duo that were shared by Instagram portal Deuxmoi.

Actor Cole Sprouse is dating a Vancouver model Reina Silva according to the recent reports. Recently, an Instagram account named Deuxmoi, which is known for sharing unofficial nuggets about popular celebrities and actors, shared some details on Cole and Reina. Deuxmoi's Instagram account accepts direct messages or emails about celeb gossip and posts them anonymously on their account. The Instagram bio of this account reads "statements made on this account have not been independently confirmed. this account does not claim any information published is based in fact."

Below is a screenshot of when the Instagram account Deuxmoi shared the details of an email submission as well as a snip of a conversation from a sender. The sender reports that Cole Sprouse's girlfriend is indeed Reina Silva, and they aren't hiding from anyone. The sender also claims that the duo is hanging out pretty often and that Reina is already friends with Cole's friends. Below the snip is also a snip of the conversation that the Instagram account holder had with one of the individual sources. 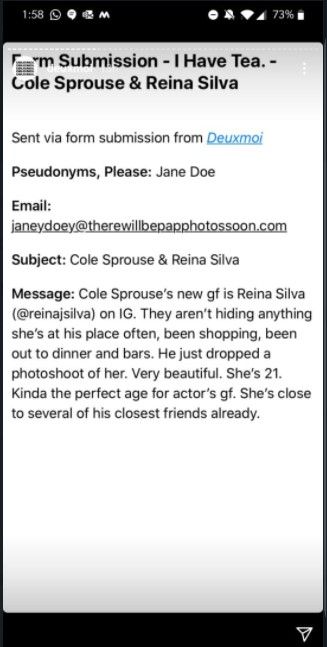 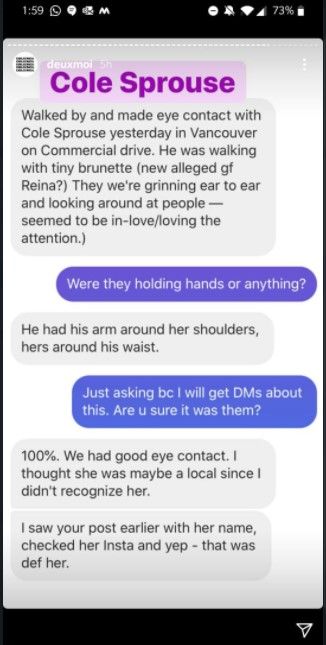 Below is the photograph of model Reina Silva, which was apparently photographed by Cole Sprouse. As many of his fans might know, Cole is an avid photographer and often clicks his friends and cast members. Reina captions this photo of herself, as "a beautiful day spent in the Fraser Valley, captured by Cole."

Cole Sprouse and Lili Reinhart were one of the most celebrated couples in the Hollywood industry. On August 19, 2020, Cole Sprouse took to his official Instagram handle to share a post regarding his relationship and breakup. Check the post here:

Lili and I initially separated in January of this year, deciding to more permanently split in March. What an incredible experience I had, I’ll always feel lucky and cherish that I had the chance to fall in love. I wish her nothing but the utmost love and happiness moving forward. All I’ll say about it, anything else you hear doesn’t matter. Also her movie comes out soon! I’m sure she’s just as incredible in it as everything else she does. Thanks guys ❤️