Brad Pitt stopped everything to catch Jennifer Aniston's speech and Hilary Duff's reaction to the same is unmissable. Take a look at the videos inside.

Brad Pitt and ex-wife Jennifer Aniston shared some adorable moments at the backstage of SAG Awards 2020 leaving fans in the awe of their chemistry. Brad Pitt and Jennifer Aniston, whose backstage greetings made headlines, also caught the attention of Lizzie McGuire actor Hilary Duff and fans cannot stop themselves from commenting on the same. Read details.

In a video that has been circulating over the internet, Brad Pitt can be seen waiting backstage to catch Jennifer Aniston's acceptance speech, which was after his win. He was seen standing and watching Jennifer Aniston's speech at ease.

While leading news daily shared the video on Instagram, A Cinderella Story actor Hilary Duff could not keep her calm. She dropped a comment on the video saying 'Oh em Geeee' and has got the internet talking.

These are the pop culture moments we live and wait for! #BradPitt and #JenniferAniston supporting each other and sharing a moment at the #SAGAwards! 😍👏🏾❤️ pic.twitter.com/wdkLmUPmKt 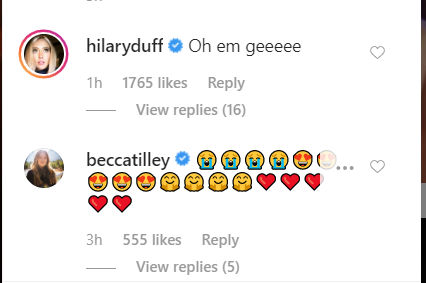 After collecting his award, Brad Pitt spoke a few words. He said, "Let's be honest... it was a difficult part. A guy who gets high, takes his shirt off, and doesn't get on with his wife. It was a big stretch." The camera panned across the hall, catching reactions of the audience, including Jennifer. Check it out.

the camera cutting to jennifer aniston clapping after brad pitt joking about his divorce is sending me https://t.co/23QaYlsK1j

Also Read | SAG Awards: 'Once Upon a Time in Hollywood', 'Bombshell,' 'Irishman,' pick up four nods