One of the hot topics of discussion on social media among fans is whether 'Megan Fox engaged?' as the actor's recent photos with MGK sparked engagement rumours

"Is Megan Fox engaged to Machine Gun Kelly?" is one of the hottest topics of discussion among fans on social media as the couple recently sparked engagement rumours on January 28. A couple of photos of the love birds recently surfaced online wherein Megan can be seen flaunting a massive ring on her left ring finger. Although the Transformers actor is still a married woman as she filed her divorce with Brain Austin two months ago, speculations are rife that Megan and MGK have decided to take their courtship a step ahead after photos of the former's engagement-like ring made rounds on social media.

On Thursday, Megan Fox and Machine Gun Kelly's photos from New York City made headlines as netizens are convinced that the celebrity couple is already engaged. Megan and MGK were snapped by the paparazzi outside a hotel in NYC, in which, the American actor was seen flaunting a huge ring on her engagement finger. The photos were first published by Daily Mail, wherein the two left the hotel to hop into their limo to attend the rehearsals of their performance in the upcoming episode of SNL (Saturday Night Live).

In the pictures that surfaced online, the 34-year-old sported a quirky headband with pink cat ears and complemented it with a matching pink animal print cardigan over an all-black outfit. On the other hand, her 30-year-old rapper beau was seen sporting a black puffer jacket along with debuting what seemed to be a fresh haircut. Soon after the pictures made rounds on social media, they took fans of the lovers by surprise and went on to make headlines as well.

Check out the pictures that sparked Megan Fox's engagement rumours below:

Megan and MGK emerged from their hotel without masks and waited for their car out front. pic.twitter.com/gBsm5u5uqx

On January 30, Megan Fox seemingly responded to her engagement rumours with Machine Gun Kelly by sharing an NSFW picture on her Instagram Stories. In the photograph shared by her, the Above the Shadows actor flaunted her left hand with a ring on the engagement finger that read, "F**k You". Check out Megan's Instagram story below: 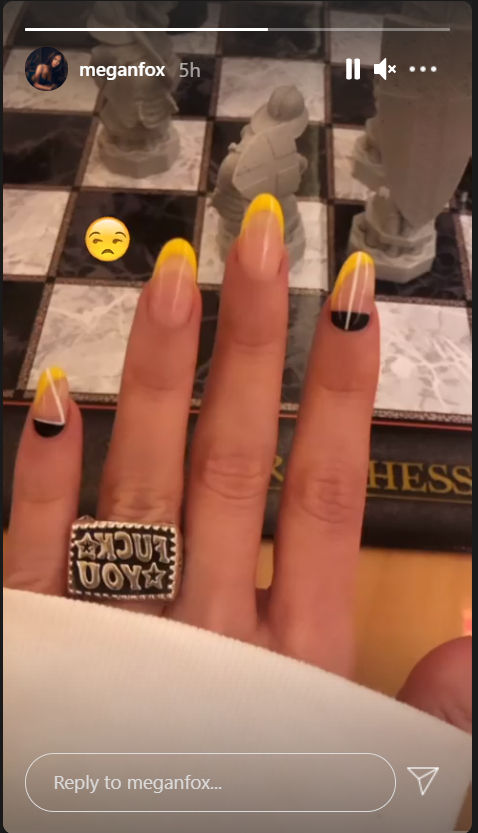