'Kissing Booth star' Jacob Elordi and '13 Reasons Why' actor Tommy Dorfman have surprised fans by their kissing picture on Instagram. Take a look at it here

Kissing Booth star Jacob Elordi and 13 Reasons Why actor Tommy Dorfman have taken social media by storm with the portrayal of their platonic love for each other. Taking to Instagram, Dorfman shared a series of pictures of the two being cosy on Wednesday, August 26. This endearing post of the star has sparked romance rumours while leaving many astonished.

In the pictures shared by the 13 Reasons Why actor, Elordi can be seen planting a sweet kiss on Dorfman’s cheek. In return, Tommy can be seen embracing Jacob’s gesture by wrapping him around in a warm hug. Being all smiles and cosy, this picture has set the internet ablaze with speculations around the two being romantically involved with each other.

In another photo, both the stars can be seen having a gala time on a boat. As the sun kisses their bare skin, the duo strikes a pose enjoying the blue picturesque oceanic backdrop. Sitting alongside, both Dorfman and Elordi appear to be staring at the wild nature.

That's not it. The last picture, shared by Tommy features him affectionately leaning towards Jacob. Grabbing his leg, the playful picture has created a stir online. While sharing these photographs, Tommy dropped a heart emoticon alongside Elordi’s name. Take a look at it here:

As soon as the photo surfaced online, fans went gaga over it. While a fan expressed, “this is the content that people need in 2020”, others couldn’t believe what they are looking at and asked ‘if this was serious’. Another fan exclaimed that they are ‘jealous’ of the duo’s banter. The reactions yet continue to flood Tommy’s comment section. Check it out here: 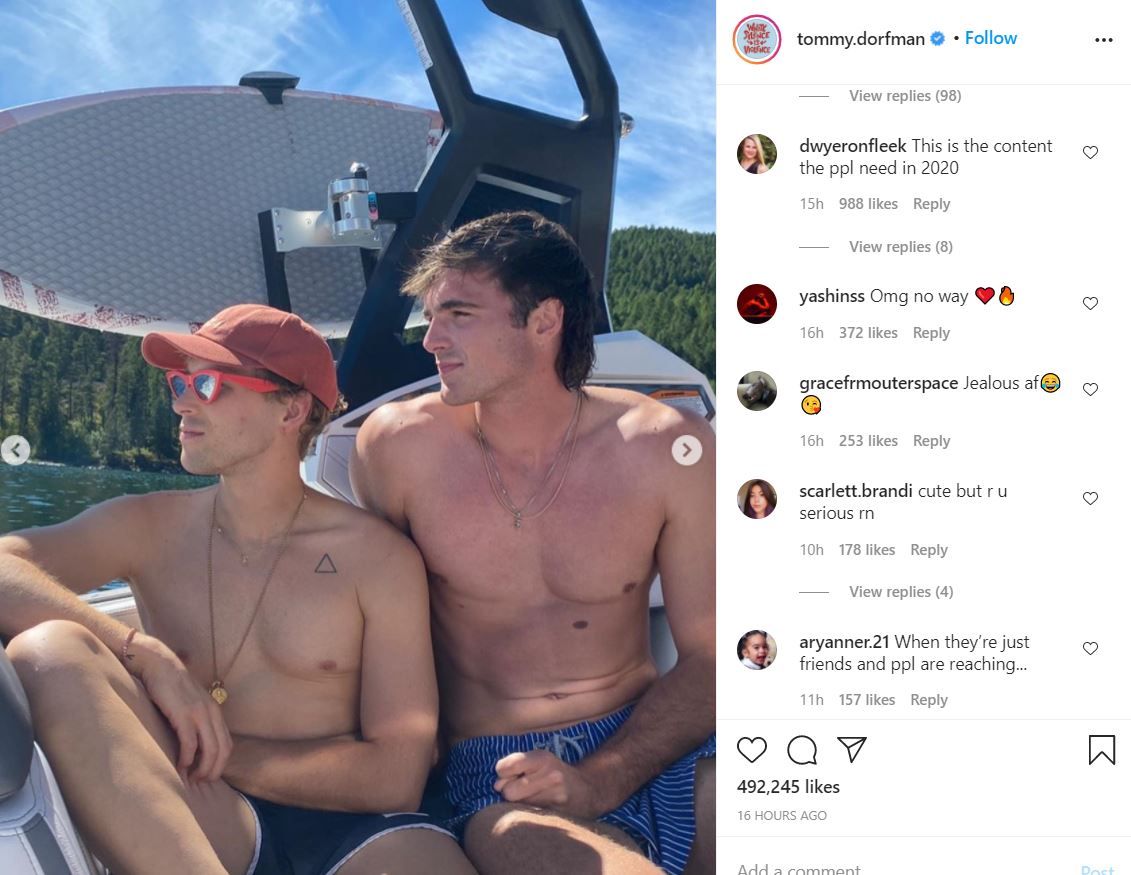 ALSO READ| Is 'Euphoria' On Hulu? Find Out Where To Watch The Zendaya & Jacob Elordi Starrer Series

With romantic rumours doing the rounds, fans are eagerly waiting for them to clear the air. However, Jacob was previously dating his Kissing Booth co-actor Joey King. But the pair parted ways back in 2018. Numerous speculations about Jacob being romantically involved with 'Euphoria' actor Zendaya also prevailed online. On the other hand, Tommy has been married to Peter Zurkuhlen since 2016.