Justin Bieber took to his Instagram to show his green sweater for the festival of Christmas. Read more to know about Justin Bieber and his upcoming music.

The festival of Christmas is here and Canadian pop singer, Justin Bieber as he has taken to his Instagram in order to show off his Christmas special green sweater. This is not just a regular sweater but one with a picture of Jesus wearing a yellow polka dot birthday hat. Justin has evidently been inactive when it comes to dropping new singles or albums and his fans certainly miss his groovy tracks. But it seems that the Sorry singer is currently busy celebrating the festive period of Christmas with his wife, Hailey Baldwin. Read more to know about Justin Bieber and his upcoming music. 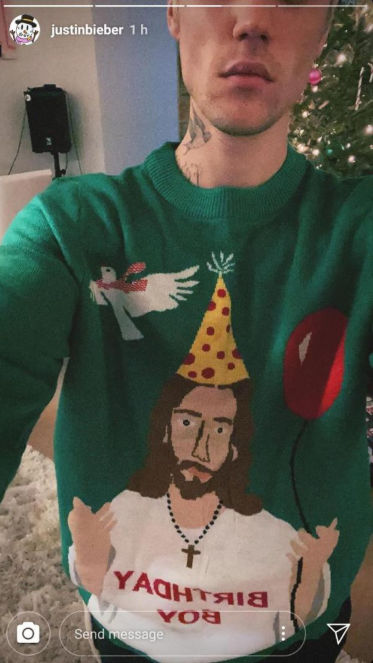 Have an amazing Christmas

The singer has not been active and his fans were not lucky enough to hear or seen anything new from the Baby singer but it seems that the festival period will be a special one for Justin this year as he recently announced the released of one of his songs from the upcoming album on December 24. On December 20, Justin Bieber took to his social media to share a picture of “2020” along with three dates: December 24, December 31, January 3 that mark the release of his songs. There also has been some confusion between the fans of Selena as they think Justin is trying to steal her spotlight given that Selena is coming out with her new album, Rare in January.