Kourtney Kardashian Clarifies To A Fan Once Again That She Is Not Pregnant; Check Details

Kourtney Kardashian seems to be having a hard time that fans keep speculating if she is pregnant. This time she clarified to a fan directly. Read on to know.

Pregnancy rumours seem to be haunting Kourtney Kardashian for quite some time now even after she has clarified time and again that she is not. Recently rumours had once again been doing rounds that she is pregnant. However, known for speaking her mind openly, Kourtney corrected a fan's misunderstanding in her latest Instagram post, simultaneously putting all pregnancy rumours about her to rest.

Kourtney Kardashian puts to rest all rumours about her being pregnant

On Kourtney Kardashian's Instagram, she recently posted a picture of herself clad in a bikini and flaunting her midriff. She posted two pictures, one near the pool and the other while lying down and reading. Kourtney also had an animal printed shirt on unbuttoned and sunglasses to complete her poolside look.

However, her outfit was not what seemed to have grabbed most people's attention. Many were quick to speculate that the celeb was pregnant owing to her curvy figure. One even pointed it out in the comment section. However, Kourtney called her out saying, "This is me when I have a few extra pounds on, and I actually love it". 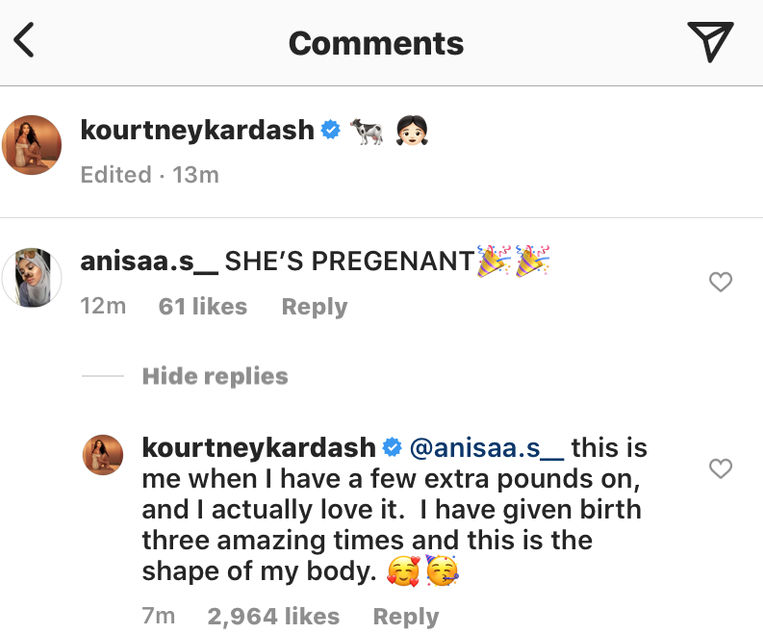 Previously, on another instance, when Kourtney Kardashian had posted a photo herself, fans had asked if she was pregnant. Even then Kourtney had clarified the rumours saying she was not. But it seems nothing is deterring her fans from making the same assumptions once again.

In other news, Kourtney Kardashian had a huge catfight with sister, Kim Kardashian on the sets of KUTWK season 18. This resulted in several days of production delays before the star appeared once again and called the show "toxic". This was followed by a recent clip from the show where Khloe Kardashian and Kim Kardashian were making fun of their older sister along with her ex-beau, Scott Disick.

Also Read: Kourtney Kardashian Calls KUWTK "toxic" After Her Return To The Show

PEOPLE HAVE PLEDGED SO FAR
LATEST NEWS
View all
1 day ago
Ryan Gosling to star in Universal's 'Wolfman'
4 hours ago
Pamela Anderson reveals she still wears her red 'Baywatch' swimsuit
1 day ago
Taylor Swift's tweet addressing the President & other top tweets of the week
1 hour ago
Arnold Schwarzenegger shares workout video with pet donkey Lulu by his side; Watch
1 day ago
Nick Jonas' week was all about mixed emotions; from celebrating love to mourning a death