Michael B Jordan wished his girlfriend Lori Harvey a very happy birthday on Instagram and also revealed her pet name for him. Check it out and know more.

Michael B Jordan wishes Lori Harvey on her birthday

Also Read | Lori Harvey: Here's All You Need To Know About The Dating Life Of The Model 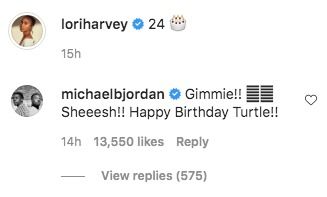 Also Read | Michael B Jordan Reveals That He Will Soon Come Up With An "OnlyFans Account"; Details

The post did not come as a shock for their fans after the on-going rumours about them being in a relationship. In December 2020, the couple was spotted getting off an airplane in Salt Lake City. The two had also shared pictures of themselves snowboarding on their respective official Instagram handles, but the location and the background in both the pictures seemed to be the same. According to reports from People, Lori Harvey and Michael B Jordan have always been very careful about being clicked together.