Spanish actor Alba Flores from Money Heist has been making headlines ever since an old video clip of her speaking in Telugu has gone viral.

Alba Flores, the Spanish actor, won millions of hearts with her performance as Nairobi in the popular Netflix show, Money Heist. Recently, clips of Flores' work on an old television show, where she portrayed the character an Indian woman, have been going viral on the internet. Fans have been going gaga over how the actor is speaking an Indian regional language so fluently on the show.

Read Also | 'Paatal Lok': Who Plays The Character Of Chanda Mukherjee? Everything You Need To Know

Alba Flores speaks in Telugu in an old TV Show

In the video that has been doing the rounds on the internet, Alba Flores can be seen clad in a saree and braided hair and acts like a Telugu woman called Shamira. Reportedly, the video clip that has been going viral is from Vincente Ferrer and was shot near Anantapur, Andhra Pradesh. Alba Flores plays the character of a teacher who is trying to educate women of Anantapur.

In a scene from the TV show, Alba a.k.a. Nairobi is seen speaking fluent Telugu while interacting with local people. Her character is trying to raise awareness among the local people and translates Spanish to Telugu and vice versa. A fan page also shared pictures of Alba Flores where she can be seen in the character from the TV film Vincete Ferrer.

Read Also | Role Of Anushka Sharma In 'Paatal Lok': Does She Feature In The Web Series?

Fans of the actor could not stop praising her for her versatility. Numerous fans praised her for speaking in an Indian regional language with such fluency. Many fans could not believe that it was the same actor who portrayed Nairobi in Money Heist. Check out some of the fans comments below. 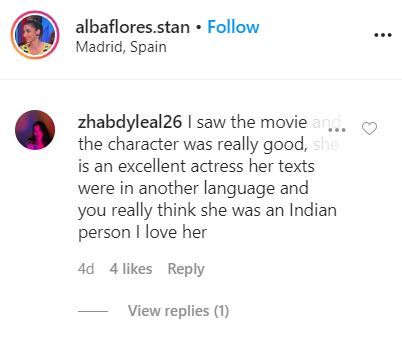 On the work front, Alba Flroes was seen in Money Heist in the lead role. She has been a part of the series since the year 2017 and portrayed the character of Nairobi in it. Apart from that, she was seen in Vis A Vis: El Oasis. In this show, she portrayed the character of Saray Vargas. The last movie she was seen was called The Memory of Water which had released in the year 2015.

Read  Also | With Hugh Jackman As Hathi Ram, Here Is What Hollywood's 'Paatal Lok' Could Look Like

PEOPLE HAVE PLEDGED SO FAR
LATEST NEWS
View all
13 hours ago
Weinstein raped me in 1994 at age 17, woman says in lawsuit
19 hours ago
Chernobyl' director Johan Renck in talks to adapt novel 'The Magus'
15 hours ago
Malaika Arora’s unforgettable pictures from her old modeling days
17 hours ago
Pulkit Samrat gives a cheesy crown to his "queen" Kriti Kharbanda; Read details
17 hours ago
Cardi B shuts down "Loud and Wrong" troll who said Kulture "ignores" her mom, read