Actor Zayn Marie from the movie Mrs Serial Killer got high praises from Farah Khan, who talked about how she got her break with Mansoor Khan, Zayn's father.

Farah Khan praised debutant Zayn Marie for her performance in the recently released Netflix movie Mrs Serial Killer. Farah got emotional as she shared that life has come a full circle for her. While Zayn’s father Mansoor Khan gave her a break as a choreographer, her husband Shirish Kunder paved the way for his daughter Zayn to enter in the film industry.

Farah Khan shared a picture with Zayn Marie on her Instagram. In the caption of the post, Farah Khan remembered how Mansoor Khan, Zayn’s father, gave Farah her break in the year 1992. She was the choreographer for the movie Jo Jeeta Wohi Sikander. Farah added how 28 years later, Zayn made her debut and has won hearts with the film Mrs Serial Killer. She added how life had a way of coming full circle.

Zayn Marie also shared an appreciation post for Farah Khan on her Instagram story. She shared how her Abbu, Mansoor Khan, always spoke of Farah Khan with much love. She also shared how it felt right that Farah would be the producer of her first film and how it was a happy coincidence. She said that it was like the universe willed it. In the end, she added how she is overwhelmed with how life works in both mysterious and beautiful ways. 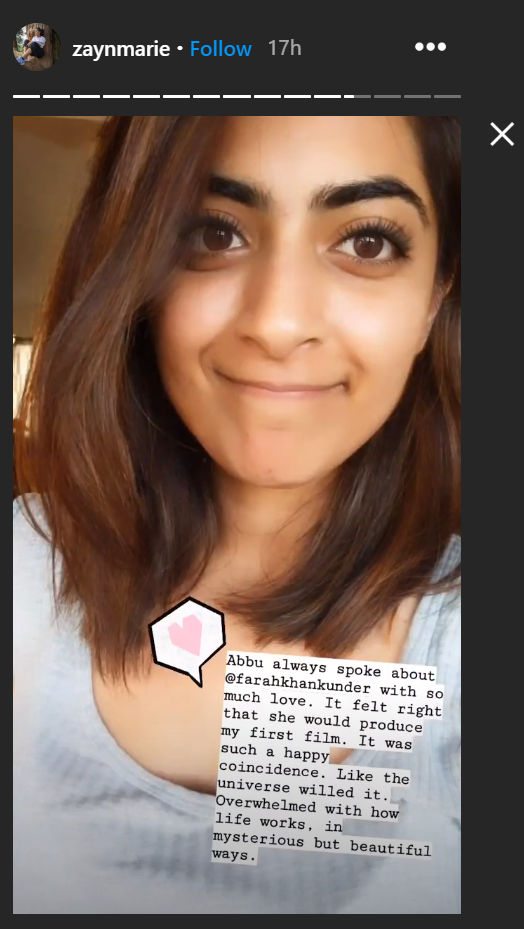 Zayn’s close friend and cousin Ira Khan shared her excitement and also congratulated her on her Instagram. Ira Khan, along with father and actor Aamir Khan, and Kiran Rao, watched the movie Mrs Serial Killer at home. In the caption of the post, Ira expressed her happiness and shared that she was proud of Zayn. She shared how no matter if its quarantine, World War 3 or a bad week or year, the Khan family will always be there for Zayn.

She also shared that she was sorry that they were not physically present with her. She added how she could hear the hooting and cheering in Panchgani. Here is her heartfelt post:

The movie Mrs Serial Killer stars Zayn Marie alongside Jacqueline Fernandez, Manoj Bajpayee, and Mohit Raina in lead roles. It is written and directed by Shirish Kunder. Farah Khan is the producer of the film. The movie traces the story of Sona Mukherjee who turns into a serial killer in order to help her husband.

PEOPLE HAVE PLEDGED SO FAR
LATEST NEWS
View all
4 hours ago
Drake bell takes fans down the memory lane with his new 'wipe it down' challenge
1 hour ago
Brad pitt starrers that are available to watch to netflix; see list here
2 hours ago
Kylie jenner laughs off drake's 'side piece' controversy after drake apologizes
26 mins ago
Kendall jenner's pictures in warm & cozy loungewear are worth checking out; see here
4 hours ago
Hailey baldwin, justin bieber threaten to sue surgeon who claimed the model got a nose job