Billie Eilish, who recently made headlines for winning five Grammy awards, brought her soulful voice to the Oscars 2020 stage. Read on to know more

Billie Eilish, who recently made headlines for winning as many as five Grammy awards, brought her soulful voice to the Oscars 2020 stage. Her emotional and touching performance during the heartfelt ‘In Memoriam’ segment hit the right chords with the audience. She graced the stage with a heartfelt cover of Yesterday by The Beatles.

Billie Eilish was accompanied by her brother Finneas O’Connell who played the piano alongside her. Before the Oscars 2020 began, the pop icon took to her Instagram, to announce that she was going to perform in the Memoriam segment with a song she loves a lot. Have a look at Billie Eilish’s Instagram story here. 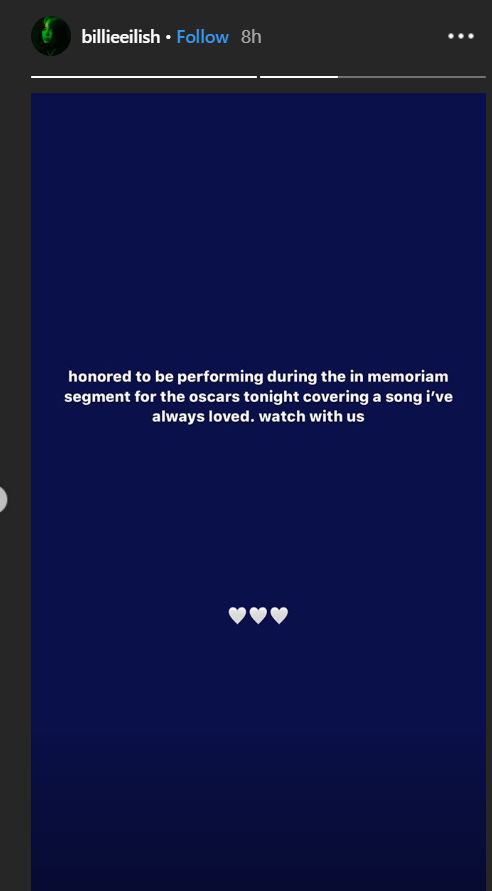 Among those honoured in the profound segment was NBA legend Kobe Bryant, who recently passed away in a tragic helicopter crash along with his daughter Gianna Bryant.

Billie Eilish gives a haunting and beautiful rendition of "Yesterday" during the #Oscars In Memoriam segment pic.twitter.com/oFj1Ljnx70

#BillieEilish performs "Yesterday" during the Memoriam segment at the #Oscars and it was beautiful! pic.twitter.com/a1TJKr75ih