Pedro Pascal took to Instagram on Wednesday, February 10, 2021, to shower and blessings to his sister Lux as she comes out as a trans woman.

American-Chilean actor Pedro Pascal took to Instagram on Wednesday, February 10, 2021, to shower love and blessings to his sister Lux as she came out as a trans woman. Along with the pictures, the actor also penned a sweet note for her.

Taking to his Instagram handle, Pedro Pascal shared a picture where he introduced Lux to the world as transgender. The actor went on to share a cover for the Spanish-language Ya magazine, in which Lux graced the cover, as a way to share his love and support for her. In the picture, Lux can be seen looking right into the camera as she strikes an intense pose. She can be seen donning a black outfit and completed the look with one-sided hairdo, well-done brows and minimal makeup.

Along with the picture, he also wrote a note revealing details about the same. He wrote, “Mi hermana, mi corazón, nuestra Lux”. (Which means ‘my sister, my heart, our Lux). Take a look at the post below.

As soon as the post was shared online, fans went all out to comment and laud Lux for her decision. The post garnered likes and comments from netizens. Celebs such as Gal Gadot, Amy Sedaris, Edgar Ramirez and more have also been sharing nothing but love on the post. Check out a few comments below. 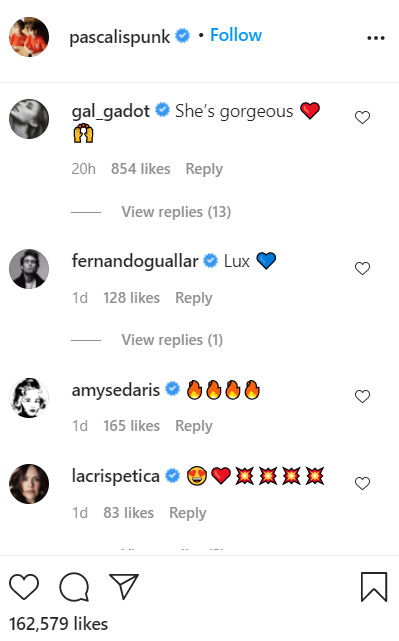 According to PEOPLE, Lux started receiving hormone therapy back in July and is now studying acting at the Juilliard School in New York City. She revealed that her transition has been something that's very natural for everyone in her family. She also said that It's almost something that they expected to happen after she reassured him, he congratulated her saying, perfect, this is incredible.