Priyanka Chopra is a proud wife. The Bollywood star took to Instagram and shared a story about Nick's rumoured casting in a critically acclaimed musical.

Priyanka Chopra is extremely proud of her hubby Nick Jonas. In her recent Instagram story, the former Miss World cheered for her husband as he is expected to be cast in a critically acclaimed musical titled Jersey Boys. The news of Jonas’ casting instantly went viral but confirmation is yet to reported. Find out more details about this story below.

Priyanka Chopra and Nick Jonas are one of Hollywood’s star couples. Both the A-listers are busy round the clock working on their individual careers. While Priyanka is busy shooting and producing new projects, Nick Jonas is currently focused on his acting career and producing new music with his brothers Kevin and Joe Jonas.

But even with their tight schedules, Priyanka Chopra and Nick Jonas find time for each other and appreciate each other’s achievements. No wonder, with each new post, the couple sets new #couplegoals on social media. Recently, Priyanka Chopra once again proved her love for Nick Jonas and reposting a picture of Nick’s rumoured new project.

According to a report by Deadline, Nick Jonas is in talks to star in the streaming event of Jersey Boys musical. The musical has won a Tony Award and hence it could be a new shining in Nick Jonas’ acting career. Bohemian Rhapsody’s Graham King will be producing the event. Nick Jonas is expected to portray legendary Four Seasons front-man Frankie Valli in the musical. 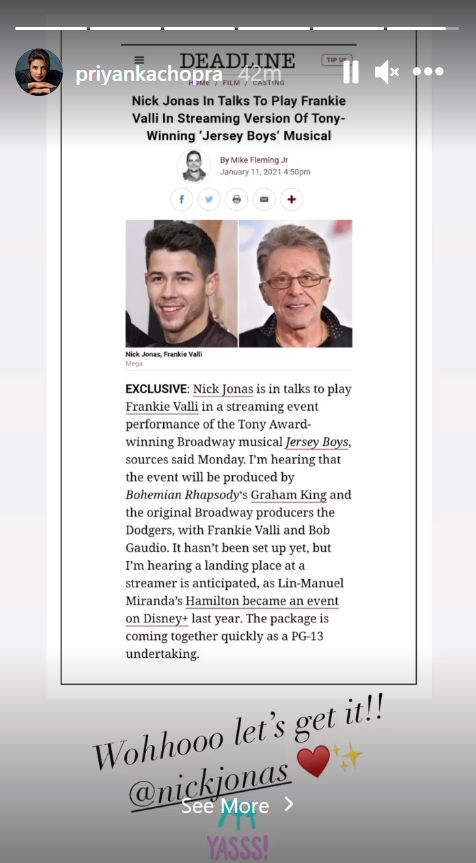 But Priyanka Chopra is not the only one who roots for her significant other. Back in October 2020, Nick Jonas took to Instagram and shared the cover page of Priyanka Chopra’s memoir Unfinished. He also wrote, “So incredibly proud of you @priyankachopra quick question... can I please get a signed copy ðŸ˜ everyone go pre order my wife’s beautiful memoir now!”. Take a look at Nick Jonas’ Instagram post here.