Sarah Hyland shared a beautiful picture of her and Wells Adams on which the latter left a cute comment. Sarah did not back down from posting a hilarious reply

Christmas is a week of joy, love and all kinds of festivities. Everybody usually spends this time of the year with their loved ones or with their special ones. Sarah Hyland and Wells Adams aren't different either. The duo got engaged earlier last summer and looks like they do not leave any chance to express their love for each other on social media. To drive away Monday blues, let's take a look at this cute post of theirs from last Christmas.

When everybody was busy celebrating Christmas, complaining about the gifts and food, Modern Family actress Sarah Hyland and Bachelor Nation alum Wells Adams took to Instagram to share a cute picture from Christmas. Sarah captioned the said photo, “Third Christmas with you but first one engaged. You’d think we’d know how to take a proper picture at this point 🎄💍💕” The picture and their expressions say it all. 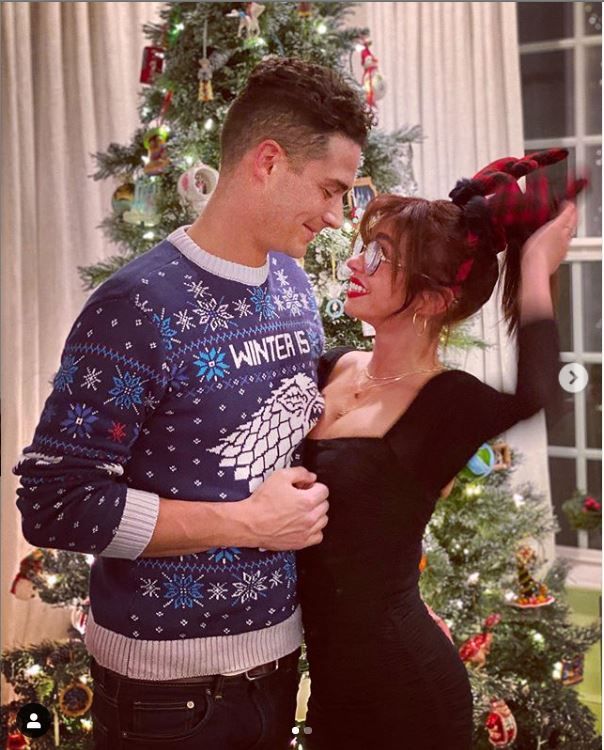 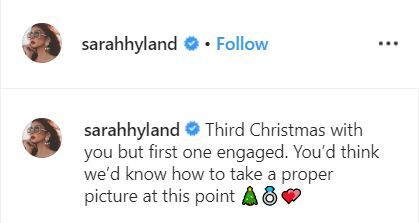 Read Also: All The Star Wars Shows On Disney+ That Will Follow The Mandalorian

Just as Sarah uploaded this picture, Wells Adams left a comment that made everybody laugh and cringe at the same time. As you can see Wells, in the picture, is wearing a Game Of Thrones sweater with a Dire Wolf on it. He commented on Sarah's photo saying “My dire wolf really loves breast meat apparently.” Meanwhile, Sarah replied with equal pazazz, “I apologize for there not being enough meat to feed your Wolf 🤷🏻‍♀️” This lovely yet funny banter has won the hearts of thousands. People have been leaving comments and showering them with affection and love. Sarah Hyland is very active on social media. So it might not be very long until fans experience something else like this. Fans will be waiting to see what these two have in store for them next.

PEOPLE HAVE PLEDGED SO FAR
Miley Cyrus and Liam Hemsworth's most adorable pictures you must check out
Ryan Reynolds and Blake Lively's photos that give major couple goals; see
Millie Bobby Brown strikes back at haters for sexualisation & inappropriate comments
Johnny Depp says he called off marriage with Amber Heard after she defecated on his bed
Dev Patel to star in financial thriller 'Flash Crash'
DO NOT MISS
TAJINDER BAGGA TAKES ON TEJ PRATAP
21 DEAD IN BUS COLLISION IN TN
DEVENDRA FADNAVIS GRANTED BAIL
SUSHIL MODI HITS OUT AT KISHOR
WHOSE BOWLING ACTION BEST?
SC ORDERS RELIEF FOR ANSAL BROTHERS