Selena Gomez shared a relaxed mood selfie as she chose to be happy today. The actor's note was all about spreading positivity and choosing happiness. See pic

Selena Gomez recently entertained her fans with a new song titled Boyfriend. The song was widely loved and appreciated by her fans. The singer has been entertaining her fans with her cooking skills amid quarantine. Recently, the actor shared a no-makeup selfie and also shared a beautiful message with her fans.

Selena Gomez shared a mirror selfie where she is seen carrying a relaxed look. The actor is seen sporting a black pullover as she poses for a picture. The interesting thing about the picture was a note that was pinned on the mirror. The note says, “I am in charge of how I feel and today I am choosing happiness.” Selena kept it all-natural for the picture as she ditched makeup and tied her hair in a messy bun. 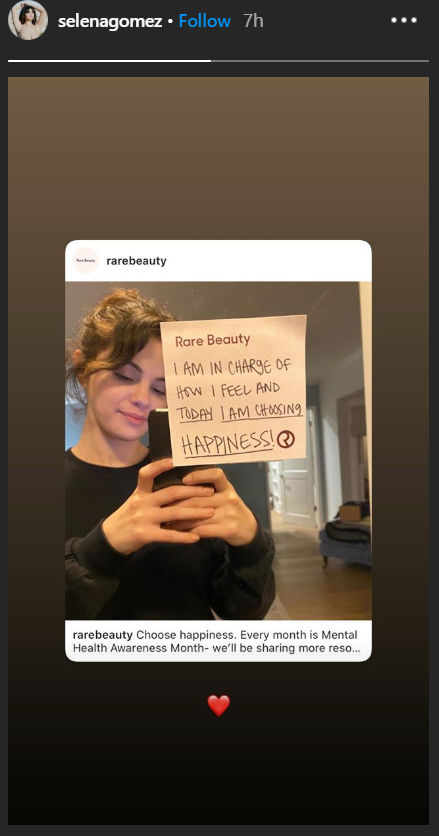 Selena Gomez recently expressed her delight over two medical workers dancing to her song Boyfriend. The song premiered on April 10, 2020, amidst the Coronavirus lockdown and has been doing the rounds on social media ever since. A number of people can be seen making dance videos on the song as it has catchy beats to groove to.

In the video posted, two women can be seen wearing proper protective gear as they make the fun video while on a break. They can be seen wearing gloves, masks, protective glasses and headcovers while they do a simple groovy dance. They can also be seen wearing coveralls that have the words “single” and “not taken” written over them. Selena Gomez has written in the caption that the fun TikTok video made her smile. She also wrote that she is thankful to every medical professional who has been working on the frontlines.

This made me smile so much!! Thank you to every single medical professional on the frontlines. You guys are heroes â¤ï¸ https://t.co/9pAdxPb7rt pic.twitter.com/9RR8zzD9EO

PEOPLE HAVE PLEDGED SO FAR
LATEST NEWS
View all
3 hours ago
From kylie jenner to rihanna, here are forbes' richest self-made women
1 hour ago
Cameron diaz to be selective about work, wants to focus on her baby
6 hours ago
Unseen pic of the day: kate winslet's before and after vfx pic from titanic will stun you
3 hours ago
Ryan murphy's 'film twitter' aka 'glee reboot' stars brad pitt, timothee chalamet and more
1 hour ago
Ray porter plays role of 'darkseid' in the upcoming snyder cut of 'justice league'?