11 BAFTA Nominations For 'Joker' Has Fans Rejoicing On Social Media

Todd Phillip's Joker received a total of 11 nominations in BAFTA 2020. The film's enormous fan base reacted to the news. Check out what they had to say.

Todd Phillip's Joker was released on October 2, 2019, and since then has been breaking all kinds of records. The film is a visual wonder and Joaquin Pheonix's amazing portrayal of the infamous Joker character has left audiences mesmerized. The movie did very well in the box-office and also garnered critical acclaim.

Read Also: Tom Hanks To Ellen DeGeneres: Here Are All The Memorable Moments From Golden Globes 2020

Joker Wins 11 BAFTA Nominations & This Is How Fan's Reacted

The BAFTA nominations for 2020 have been revealed and Joker leads the list with a total of 11 nominations. Todd Phillip's controversial movie has beat both Martin Scorsese's The Irishman and Quentin Tarantino's Once Upon A Time In Hollywood which is a close second with 10 nominations each.

Joker movie was able to turn 2 wins out of 4 nominations in Sunday's Golden Globes 2020 with Joaquin Pheonix walking out with the Best Actor award but losing Best Director to Sam Mendes' First World War epic about soldiers trying to survive on the Western Front, 1917.

With such course of events, we are waiting to see how many nominations Joker receives for the Oscars 2020 which will be announced next week. The Irishman and Once Upon A Time In Hollywood are competing for Best Film, Best Direction, Best Production Design and Best Editing with each other and Joker.

Read Also: Phoebe Waller-Bridge Says She Hasn't Changed Her Mind, There Won't Be A 'Fleabag' Season 3

Fans have been pouring in their love for Joker on Twitter. The film has a huge fan-base who are thrilled since they heard the news. Different fan clubs of the actor and the film have been leaving comments under the official twitter post of the production house when they announced the extraordinary feet. 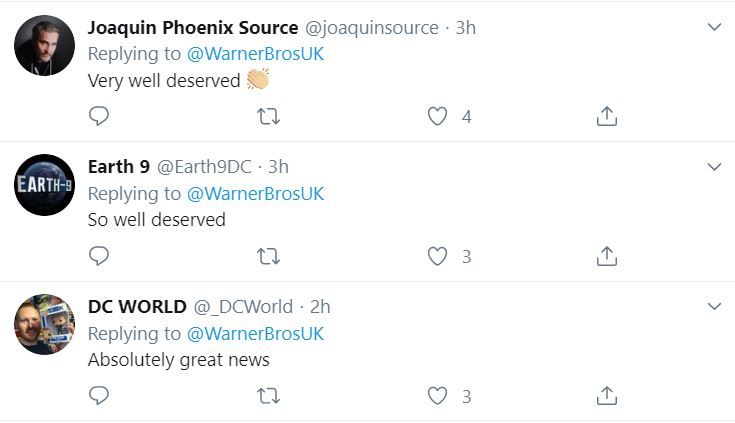