Tom Holland shared a video of himself snowboarding on a slope and while Jake Gyllenhaal replies by sharing a video of his own. Check out the videos, here.

Spider-Man: Far From Home co-stars Tom Holland and Jake Gyllenhaal share a great bond ever since the two co-starred in the Marvel movie. While Tom Holland plays the role of Spiderman, Jake Gyllenhaal played the anti-villain Mysterio. The duo has been inseparable since their bond has been talked about a lot.

Tom Holland who has been quarantining with his family had shared a throwback video saying that he missed hanging out with Jake Gyllenhaal. While posting the video, he jokingly referred to Jake Gyllenhaal as his husband.

Tom Holland took to his Instagram and posted a video of him coming down a snowy slope. Wearing a black coloured t-shirt and red coloured pants, he tries to stop near the camera, however, he fails miserably and misses the mark. Tom Holland posted the hilarious video with a caption that read, ‘Pretending like I’m in control!’ [sic]

Just a few hours later, Jake Gyllenhaal took to his Instagram account and shared a video of himself climbing a snowy mountain. He is seen wearing an all blue attire and carrying a bag pack in the video. Jake Gyllenhaal while posting the video mentioned Tom Holland’s snowboarding. He wrote, ‘Me trying to find @tomholland2013 snowboarding.’ [sic] 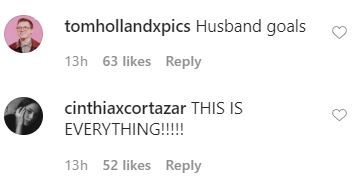 Tom Holland’s brother Harry Holland has commented on the post with laughing emojis. Fans of the actors couldn't keep calm after they saw the videos. Many of the fans have commented on the video as well. Fans couldn’t help but adore their friendship. Many jokingly asked the actor if he found Tom Holland on the slopes, while others stated that the two are an absolutely adorable bond.