Chrissy Teigen put out a request asking for a follow from the new POTUS account. And now, the new POTUS has made her wish come true by following her.

Chrissy Teigen’s wish has come true. She is very active on Twitter and has often dealt with trolls for being blocked by Donald Trump's official POTUS on Twitter. Recently, she put out a request asking for a follow from the new POTUS account. And now, the new POTUS has made her wish come true by following her.

Chrissy Teigen's request to the POTUS

Yesterday, Chrissy took to her Twitter and addressed Joe Biden by saying that she had been blocked by the previous US President Donald Trump for four years and requested if she could get a follow from the newly appointed POTUS. Today, Wake Up to Politics newsletter author Gabe Fleisher has pointed out that Joe Biden has followed several of his aides, along with Chrissy. Chrissy was the only private citizen to get a follow from POTUS. 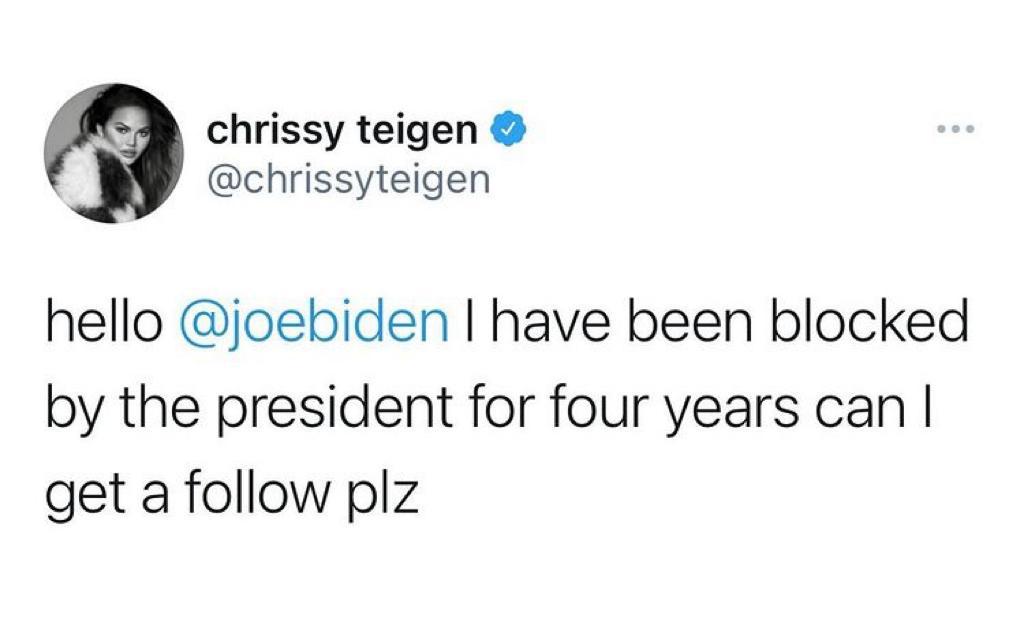 Gabe Fleisher said, that the official account of new POTUS followed 11 people, including Vice President Kamala Harris, Doug Emhoff, Dr Jill Biden, among others and then Chrissy Teigen. Gabe also shared the screenshot of the people whom the POTUS followed. In reaction to his tweet, Chrissy also commented exclaiming Oh My God! She added that she would finally see the president’s tweets and they probably wouldn’t be unhinged.

The official @POTUS account now follows 11 people — all of them Biden aides or accounts, and then @chrissyteigen. pic.twitter.com/XyaQ6rVBei

Chrissy was seen at the inaugural concert on Wednesday night with her husband, John Legend and his kids. She had travelled to Washington, D.C. for the event. Actor Tom Hanks hosted a 90-minute show called Celebrating America for Joe Biden's inauguration. She also shared a photo of her at the inauguration ceremony. In her post, she also mentioned that everything was new and better. She said she was the happiest.

ran our asses up the stairs for this shot. just incredible to be here. sober. I know that’s weird but it’s like...a different world for me. everything is new and better. very happy. the most happy bigly happy pic.twitter.com/kdbp9A8ocE

Chrissy was blocked by former President Donald Trump in July 2017. Trump had tweeted saying, "It’s very sad that Republicans, even some that were carried over the lines on my back, do very little to protect their President." On his tweet, Chrissy had replied saying no one liked him. A few days later, she had shared that Trump blocked her as a result of her reply to his Tweet.

After 9 years of hating Donald J Trump, telling him "lol no one likes you" was the straw pic.twitter.com/MhZ6bXT1Dp