A R Rahman Thanks Fans For 'kind' Birthday Wishes With An Adorable Clip; Watch

In order to thank all the fans for wishing him on his birthday, this year, AR Rahman released an adorable video of a little girl on Instagram. Take a look

Hailed as the music maestro of India, AR Rahman rang in his 54th birthday on Wednesday, January 6. The music icon has immensely contributed to the Hindi and Tamil film industries. In the career spanning over three decades, he has received several honourable accolades including the Grammy Award. On his birthday, AR Rahman received a plethora of wishes online from fans and well-wishers all around the world. In order to thank all the fans, this year, the legendary musician released an adorable video.

AR Rahman thanks all fans

Taking to Instagram, Rahman posted a cute video of a 4-year-old munchkin. In the clip, viewers can see the little girl introducing herself, as she begins to wish the composer. "Happy birthday uncle A R Rahman, may you be always healthy and happy", she says pouring in love on AR Rahman’s birthday. Further on, the little girl announces her name and expresses that she wants to sing for the music composer. “I am Janani, I am 4 years old, I am going to sing a song for you," the girl adds.

Although the short video doesn’t include the footage of her singing, the clip has won several hearts online including AR Rahman. After receiving the adorable video, he quickly responded to it and wrote, "Thank you Janani all others for your kind wishes". Here’s a quick look at the post shared by him:

As soon as the video surfaced online, it garnered tremendous likes in no time. While some fans couldn’t get over the cute video and dropped heart emoticons in abundance, on the other hand, many others continued to wish the ‘music legend’. Here’s taking a quick glimpse at how fans are reacting online: 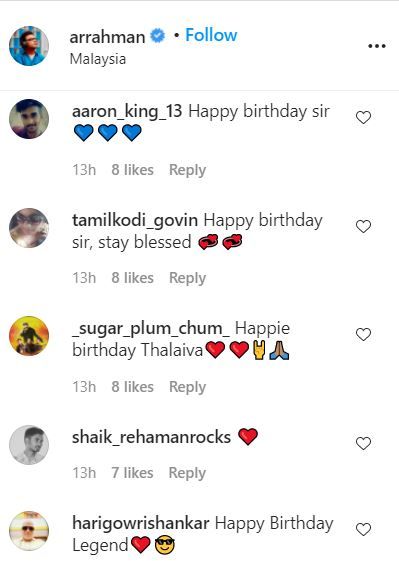 ALSO READ| A R Rahman Hops On Board For 'Cobra', Teaser To Be Out On January 9, See Tweet Here

Meanwhile, fans celebrated AR Rahman’s birthday by trending #HappyBirthdayARRahman on Twitter. A number of fans posted several fan-made images of the singer as a tribute to him while many others continued posting snippets of his various compositions online. Prominent celebrities also chimed in to pour in love by extending warm wishes on his birthday. Check it out:

ALSO READ| AR Rahman's Birthday: Take This Quiz To Test Your Knowledge About The Musical Maestro