BTS Fans On A Frenzy! #FallonAsksBTS Trends On Twitter As Band Returns To The Tonight Show

BTS fans went on a questions spree after The Tonight Show starring Jimmy Fallon makers announced that they will be returning to the show after almost 2 years.

BTS or Bangtan Sonyeondan is returning to the talk show, The Tonight Show Starring Jimmy Fallon. BTS had last appeared on the popular show back in 2018 when they released their title MV Idol, a peppy K-pop song. The supergroup will once again grace the show as per the revelation made on the official handles of the show. In relation to the interview, Jimmy Fallon will be doing a special segment, where fans can direct questions to BTS. The show makers announced on their Twitter, to tweet questions to the K-pop juggernauts. Fans went on a frenzy with the hashtag #FallonAsksBTS. The tweet received over 162K and counting responses in a matter of hours.

Here is what the makers of The Tonight Show Starring Jimmy Fallon shared :

.@BTS_twt is coming back to #FallonTonight and Jimmy wants to ask them YOUR questions! Tweet your questions for BTS using the hashtag #FallonAsksBTS! pic.twitter.com/rDJfU8A6nM 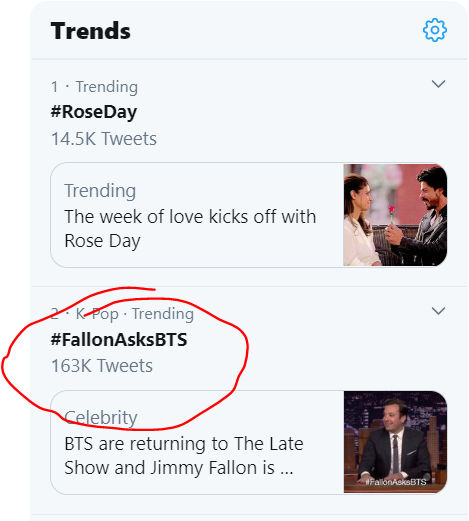 Some of the interesting and funny questions shared by fans:

IMPORTANT QUESTION: what did jungkook sent to hobi#FallonAsksBTS @BTS_twt
pic.twitter.com/0b2cS4mg2L

.
When will Namjoon be formally announcing his candidacy for presidency?
.#FallonAsksBTS pic.twitter.com/w8d4EzNa3a

Does Min Yoongi knows about all his nicknames OR how he has cat pics that match each and every pic of himself? #FallonAsksBTS pic.twitter.com/iZBE2TrkA6

Can you tell us about the time you met Baz Luhrmann & if there are any collaborations in the future?@BTS_twt @FallonTonight #FallonAsksBTS pic.twitter.com/WeAQSbqj3m

what are jin’s thoughts about getting carried by ashton? #FallonAsksBTS pic.twitter.com/U3iLfecUdM

Does BTS know the impact their music have on the fans and how much it did help many army through some hard time? Also what is the relation between persona shadow and ego ? #FallonAsksBTS

CAN YOU ASK BTS IF THEY SEE HOW MUCH ARMYS STRUGGLE TO GET CONCERT TICKETS #FallonAsksBTS
pic.twitter.com/5IEuRcPmha

#FallonAsksBTS
🌟BTS, Where were Yoongi when you took a photo with Ariana Grande?😼 pic.twitter.com/XozSvq745r