Read further and check out Diljit Dosanjh's 'special soup recipe' taught by his friend. The actor shares a video of the recipe on his Instagram. Watch.

Diljit Dosanjh took to his Instagram handle and shared a 'Special Soup Recipe' with his fans and followers. She posted a video of him on IGTV, wherein he taught everyone to make this soup with a special ingredient. Diljit Dosanjh gave a step to step guide to make the special soup. Take a look at  Diljit Dosanjh's Instagram video.

In this 2.05 minutes video, Diljit Dosanjh guided his fans to make a special soup recipe. The video began with Diljit welcoming everyone to 'Diljit's Kitchen'. He further added that the soup recipe was taught him by his friend. He listed down the ingredients needed to prepare the soup-salt, ginger garlic paste, black pepper, tomato puree, boiled vegetables and a special ingredient, he revealed towards the end. He also told everyone that the special ingredient is provided to him by his friend.

Diljit started cooking the soup, he first boiled some water and added ginger garlic paste and black pepper to it. He further added tomato puree, boiled vegetables and some salt. He then went on to add the special ingredient. Unaware of what the blue liquid is, Diljit added that ingredient to his soup.

He later realised his soup was spoiled and called his friend questioning about the compound. Diljit's friend revealed that he gave him 'SUP' recipe, a recipe to make superheroes. After creating a blunder, Diljit Dosanjh suggested everyone to watch superhero web series The Boys and learn how to make a soup.

Fans were left in splits

Fans and followers seem to have a good laugh over Diljit Dosanjh's video. With hours of its release, the video received more than 507k views on Instagram. One of the users wrote, "Hayeeeeeee m bht dhyan se dekh rhiii thiiðŸ˜‚ðŸ˜‚ðŸ˜‚ðŸ˜‚" (I was watching keenly). Another fan commented, "We are punjabi's & we are born super hero... OKKKK ðŸ˜‚ðŸ˜‚ðŸ˜‚ðŸ¤©ðŸ¤© he's back with another dhamaka ðŸ”¥ðŸ”¥". 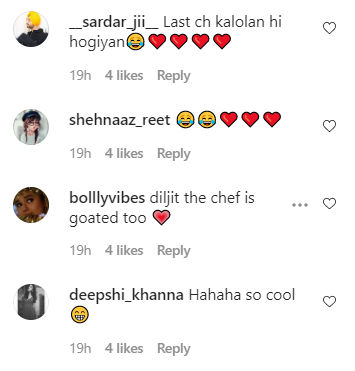 The Boys is a superhero television series, whose second season recently premiered on Amazon Prime Video. This series is based on the comic book of the same name by Garth Ennis and Darick Robertson. The first season premiered on July 26, 2019. The makers have also announced the third season.