EXO's Suho is now heading for his mandatory military service. His band members have shared the pictures of their send-off tradition on their Lysn account. Read

EXO is a South Korean–Chinese boy band that has 9 members including Xiumin, Suho, Lay, Baekhyun, Chen, Chanyeol, D.O., Kai and Sehun. The band recently made it to the headlines as the leader, Suho has enlisted for his mandatory military service duties at the ROK army's Nonsan new recruit training centre. His fellow band members have stuck with their tradition of the usual send-off that was also given to D.O. and Xiumin last year. Suho's enlistment took place privately during the ongoing COVID19 lockdown. Aso soon as the new recruits reported in for their basic training, EXO's staff members updated their fans with some never-seen-before photos via the Lysn app. Read more to know about EXO’s Suho. 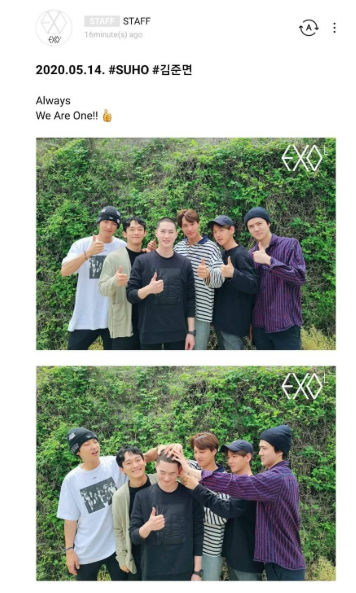 Suho gets an EXO-special send-off

The pictures shared by the EXO team shows the band members Chanyeol, Chen, Kai, Baekhyun, and Sehun posting for the camera as they are carrying out the send-off traditions for Suho. They initially started this tradition of putting their hands together on the enlisting member's head last year. They started the tradition when D.O. and Xiumin had gone for their duty to be enlisted for their military training. This particular moment was a special one not only because of Suho’s enlistment but also because this was Chen's first time greeting fans since his marriage and the birth of his daughter.  After getting done with his 4-week basic military training, Suho will serve the remainder of his duties as a public service worker.  Meanwhile, the fans of the band have been sharing posts of Suho’ send-off with the now trending hashtag #LetsMeetAgain_SUHO. Here are some fan reactions on Suho’s send-off for his military services.

i missed them all ðŸ˜­ see you in 2 years, stay safe and healthy our leader Kim Joonmyeonâ¤ï¸ #LetsMeetAgain_SUHO pic.twitter.com/DbMCRHAO5B