Justin Bieber reveals a cute and 'Goo Goo' nickname Hailey Beiber has associated him with which he finds cute and really likes. Read further to know.

Justin Bieber and his wife Hailey are regarded as one of Hollywood’s power couple. The duo often gives fans major couple goals. They are often seen sharing adorable pictures of each other on social media and also have a friendly banter sometimes.

Just recently Justin celebrated his 26th birthday and called his wife as the perfect gift he has received. Hailey too showed her love to Justin in a cute post she shared on Instagram. Justin recently appeared on the popular The Ellen DeGeneres Show where a segment called Burning Questions required him to answer a few questions. Therefore, Justin answered one such question which left the audience gushing over the relationship he shares with Hailey.

The Yummy star was quizzed about what nickname Hailey has associated him with. Justin responded after thinking for a while, he claimed Hailey calls him ‘Goo Goo’. Justin mentioned that even though it sounds weird he finds it incredibly sweet and that he likes it very much. Ellen and Justin later proceeded to use the nickname and called each other ‘Goo Goo’. Justin later concluded by saying that Hailey has got him wrapped around her finger.

Soon after Ellen shared the video on Instagram, fans came in with their pleasant comments expressing how cute this sounds. They also mentioned that they loved how cute the relationship between Justin and Hailey really is. Soon fans noticed that Jennifer Aniston liked the post as well by giving a heart react to the cute confession made by Justin. 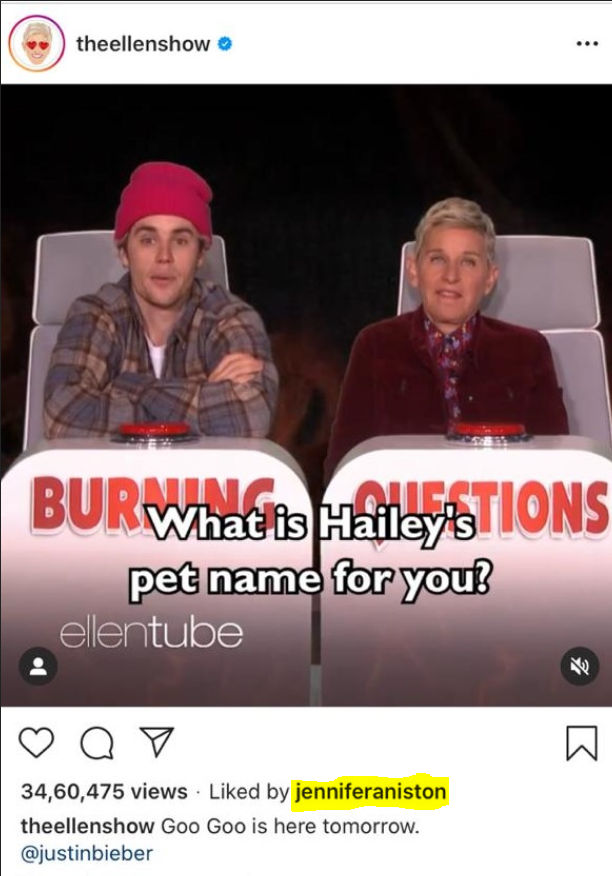