Katy Perry recently made a big revelation through her music video. Listening to this, fans are all gaga and the news has also taken the internet by storm, read.

American pop singer Katy Perry confirmed that she is pregnant in her latest Instagram post. For a while now, there had been reports that Katy Perry and Orlando Bloom were expecting their first child together. And now, Perry just confirmed it on social media.

Katy Perry recently took to Instagram to share a glimpse of her much-awaited song, Never Worn White. In the video, Katy Perry looked divine as she was dressed in a completed floral studded gown complete with a headgear. The next scene shows her wearing a white elegant gown and looks completely exquisite as she opted for glowy makeup, wavy hair, and no jewellery.

In the video, Katy Perry also gave a glimpse of her baby bump. Watch the video here.

As soon as she posted the video, her friends from the industry and her fans flooded the comment sections with praise and good wishes. They also went on to tell her that she is going to be the best mother and all were happy for her. Check out some of the comments below. 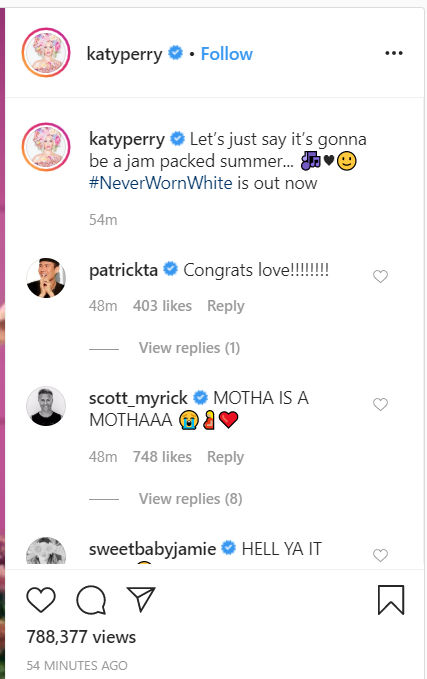 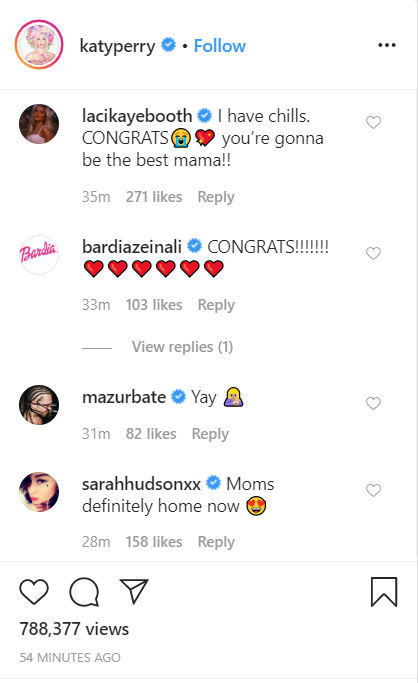 Katy Perry recently gave an interview to a leading news portal where she explained why she revealed such a piece of big news through a song. Perry said that she is very excited and this is the biggest secret she has kept from her fans ever. She also went on to say that she treats her fans with every news and she wanted it to be put out in a very special way, which was through her music.

Katy also revealed about her cravings where she said that she always carries Tabasco sauce in her bag. She also revealed that’s she has been eating the same burrito for over a week. Watch the video of her new song, Never Worn White below.