Camila Mendes took to her Instagram and shared a few BTS pictures and videos from the musical episode of Riverdale. Check out the BTS and read on to know more.

Riverdale actor Camila Mendes shared a few behind the scene pictures from the show’s musical episode that aired yesterday. In the episode, the cast joined Archie and Jughead as they sing Wicked Little Town from Hedwig and the Angry Inch. This is reportedly the third musical episode that the show has shot. However, this episode had everything from flashy wigs to makeup with sparkles.

Actor Camila Mendes, who plays the role of Veronica on the show gave her fans behind the scenes sneak peek as she shared a series of pictures and a video from the set of the show. in the pictures shared by the actor, the cast members are seen getting ready to shoot for the episode. Check out the pictures and the video shared by Camila Mendes.

In the Riverdale BTS pictures shared by Camila Mendes, the girls along with Casey Scott are seen posing for the camera. They are all sporting different coloured wigs for the episode. Another picture is taken from the sets of the show, were in the crowd is waiting for the cast members to start shooting.

In one of the pictures, the cast is seen standing on top of a roof, while the shooting is in progress. Camila Mendes also shared a Riverdale BTS video which was taken from the green room of the set. The cast members of Riverdale are seen getting their hair and makeup done.

Apart from Camila Mendes, the official Instagram account of Riverdale also shared a few BTS pictures from the sets of the show. In the one picture, Charles Melton and Casey Scott are seen taking a selfie just as they are ready to shoot. Check out the Riverdale BTS pictures.

ALSO READ: Camila Mendes's Looks Which Prove That She Is Nothing Like Veronica Lodge 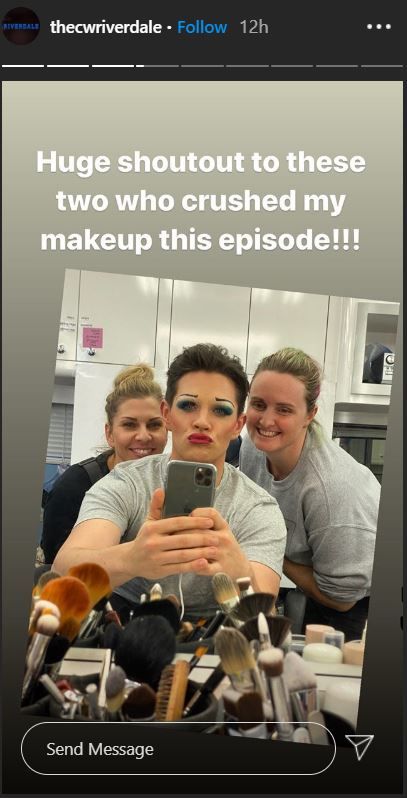 ALSO READ: Camila Mendes' Love For Polaroid Pictures Is Evident In These Posts