On Wednesday, January 6, popular Indian comedian Abhishek Upmanyu, took to his Instagram handle, to share a restaurant review with his 832k followers.

On Wednesday, January 6, popular Indian comedian Abhishek Upmanyu, took to his Instagram handle, to share a restaurant review with his 832k followers. In the clip, viewers can see the young comedian enjoying a delicious meal with a fellow friend. To add a pinch of humour, Abhishek Upmanyu accompanied the video with a fun caption. Here’s everything that you need to know about the video posted by the comedian.

Delhi’s famous outlet Karim restaurant has opened its new branch in Mumbai. In order to try the food, Abhishek visited the outlet with a fellow friend. In the short clip uploaded by him, Abhishek appears to be trying out some delicious kebabs which are served to him with onions, lemon and chutney. Going by the video, it seems that the comedian loved the food served to him.

He can be seen asking his friend if she likes the food to which his friend replies that the food is ‘tasty’. Abhishek then flaunts the name of the restaurant by showing the menu of the outlet. The comedian also wonders why there isn’t a buzz about the outlet but definitely, he recommends his fans to visit the restaurant to enjoy a delicious meal. While sharing the video, Abhishek also stresses on the fact how he has recommended the outlet to people at large in Hindi. He says,

Many of Abhishek’s followers took to the comment section and joined the discussion about the new outlet. While some thanked him for recommending the restaurant. On the other hand, a few notorious fans pulled his leg about going on a date with a girl. Although, the comedian did not reveal if he was on a date but the video has created quite a stir amongst his fans. 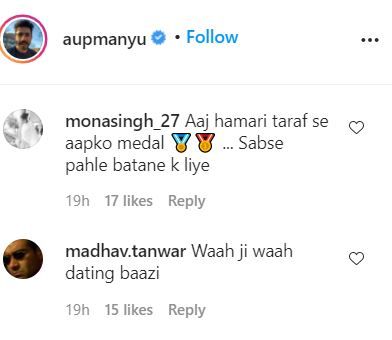 Abhishek Upmanyu is a Delhi-based stand-up comedian who is currently working in Mumbai. He is the co-founder of the popular Twitter account GareebGuy. In addition to it, the comedian also has a self-titled YouTube channel where he continues to entertain people.