Popular actor Patralekhaa took to her social media handle and shared a couple of pictures with her followers, on Wednesday. Interestingly, along with her fans, the pictures also grabbed the attention of her beau and actor Rajkummar Rao. In the photo, Patralekhaa is seen posing for the camera during the golden hour. She dropped a white saree teamed up with a black full-sleeved round-neck blouse.

While keeping it a no-jewellery look, she wore a black bindi with her messy wavy hair. Instagramming the multiple-picture post, Patralekhaa dropped three swan emoticons. Scroll down to take a look at Patralekhaa's photos in her latest Insta post.

READ | Rajkummar Rao Thanks People For Advice To Buy A New House, 'confused' Over What To Do Next

Within a couple of hours, the picture-post of the Nanu Ki Jaanu actor managed to garner an overwhelming response on the photo-sharing platform. The comments section of the post was flooded with numerous emoticons, including red-heart and heart-eye.

As mentioned above, Rajkummar Rao was also quick to drop a comment for his girlfriend's post. To compliment Patralekhaa, Rajkummra wrote, "Prettiest", along with a red heart emoji. In the response, Patralekhaa asserted, "handsomest". On the other hand, celebs like Bidita Bag, Farha Khan Kundra and Vaishnavi Mahant also dropped their comments. 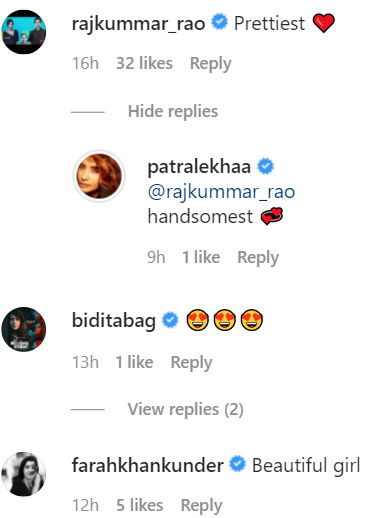 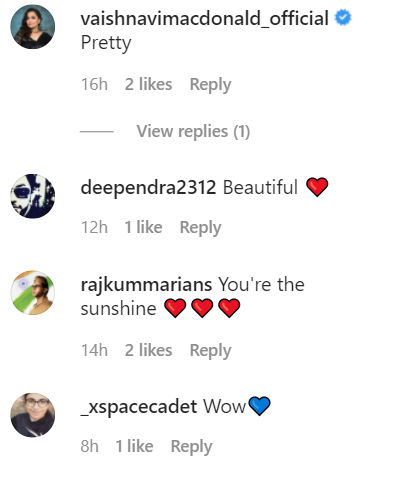 The photos shared by Patralekhaa seem to be from a photoshoot she did last year in December. She had posed for Munna S. In the monochrome photo, she was seen posing while holding a lit cigarette. In the caption, the actor added a disclaimer that read, "I don’t smoke. I don’t encourage it either".

Well, this is not the first time when the City Lights actors have grabbed the attention of their fans for their social media PDA. Rajkummar, presumably, is an avid social media user. A few days back, Patralekhaa shared a couple of pictures from her latest photoshoot.

READ | Rajkummar Rao Expresses Gratitude To 'The White Tiger' Team, Thanks Fans For Their Love

In one such post, she shared a "no edited" and "no filter picture". Rao took the opportunity to praise his ladylove and wrote, "This girl is on fire", along with a fire and red-heart emoticon. While replying to Rao's praise, the actor quipped and asked him to come and meet her.

On the professional front, Rajkummar is currently bagging praise for his latest release The White Tiger. The film, released on Netflix, also featured global star Priyanka Chopra Jonas in the lead. Priyanka and Rajkummar have received honourable mentions in the Gold List selections for their performances.