Rajkummar Rao's girlfriend Patralekhaa recalled his journey that began from Gurugram as 'The White Tiger's' poster was up in the city of New York. See post.

On Thursday morning, Rajkummar Rao took to Instagram and shared that the hoarding of his upcoming movie, The White Tiger is put up in New York. The actor shared a glimpse of the same and wrote, "Hello New York." Soon, his girlfriend and actor Patralekhaa shared the same post and recalled his incredible journey from Gurugram to New York.

She wrote, "Your hoarding is up in New York. What? Remember the first time we saw Times Square?". She further went on to laud his journey and Rajkummar Rao was quick to respond to her words. He shared a screenshot of the same and thanked his 'love' for her wishes. Take a look at the posts here. 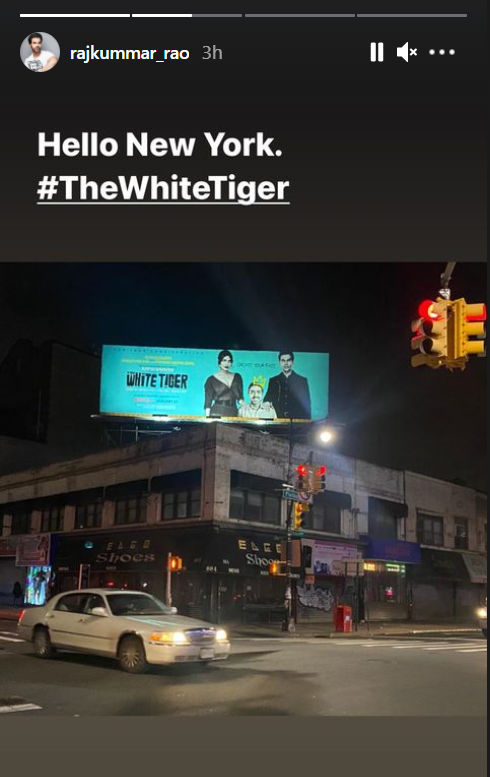 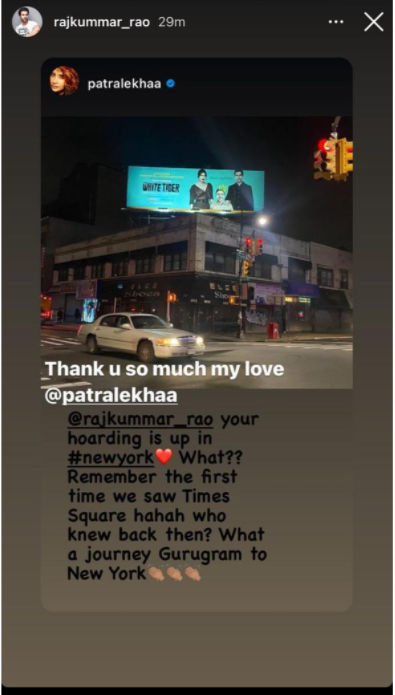 Apart from awaiting the release of The White Tiger, opposite Priyanka Chopra Jonas, he is shooting for his next outing titled Badhaai Ho, alongside Bhumi Pednekar. She shared a picture with her co-star from the film's set while the duo was prepping up for their characters.

Soon, fans flooded the comments section with excitement. "Two powerhouse actor bahut maza ayega to see @rajkummar_rao n @bhumipednekar together... Jaldi shoot karo aur release karo," wrote Bhumi's Saand Ki Aankh director, Tushar Hiranandani. In the film, Rajkummar will be seen playing the role of a cop. Bhumi, on the other hand, will essay the role of a PT teacher. Badhaao Ho is being directed by Harshwardhan Kulkarni.

The White Tiger will follow the story of an ambitious driver, Adarsh Gourav, of a rich Indian couple- Priyanka Chopra Jonas and Rajkummar Rao. He uses his wit to escape from poverty and soon becomes an entrepreneur. The movie is based on the bestselling novel by Aravind Adiga, directed and written for the screen by Ramin Bahrani. Produced by Ava DuVernay, Priyanka Chopra Jonas and Mukul Deora, The White Tiger is set to premiere on Netflix on January 22.

Also Read | 'Death In Bollywood' Documentary: When Will The Jiah Khan Docuseries Release In India?