Thirumullaivoyal T10 Police Station in Chennai was reviewed by a local man like it was a hotel. Here’s what the internet has to say about the hilarious review.

A local man from Chennai has managed to crack the internet up by posting a Google review of a police station. The man, recognised as Logeshwaran S, reviewed the Thirumullaivoyal T10 Police Station in Chennai. What left the internet in splits was the fact that he wrote the review like one would review a hotel. Since then, netizens have been adding their contribution to the review.

In the review written by the man, he stated that he was locked up in jail for driving his motorcycle without proper documentation at midnight. He further added that the station is located on the main road and is excellent when it comes to cleanliness. He complimented the staff by saying that they were kind and they let him go after proper documentation. He added that they did not take any bribes from him. What was more hilarious was the fact that he ended the review by saying that it is one must visit the place at least once in their life. 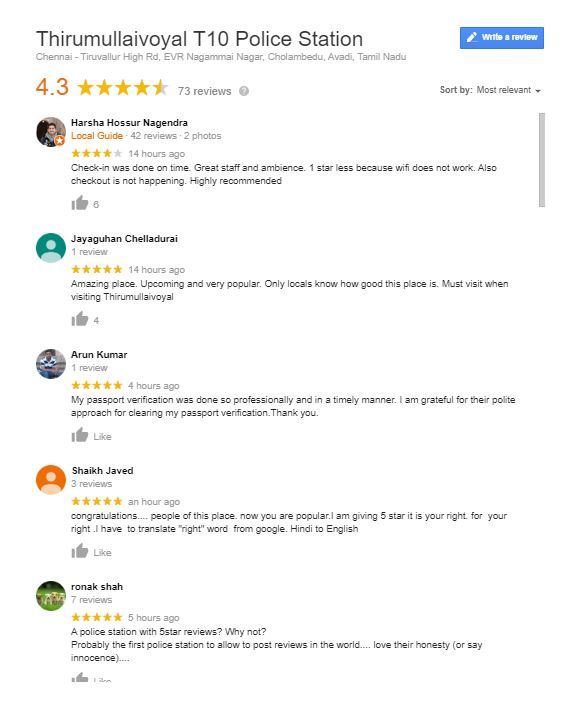 People have continued the trend by rating the police station with four and five stars. Many have also written reviews by calling the place amazing and popular. Many wrote that the ‘check-in was done on time’ and that they highly recommend the place. One internet user even went on to say that they treated Lokesh with dignity and that he couldn’t help but give the police station a five star. Ok. I understand that #ratings and reviews are a great thing for restaurants, places of interest, experiences.
But @Google , posting reviews about a police station jail lockup is taking the idea of reviews a bit too far!
What do you all think?
😂😃😂 pic.twitter.com/lHekzuXVKo

An author and a poet posted about the hilarious situation on Twitter. He wrote that rating a place with a great experience is an ideal thing, however, rating a jail is taking things a bit too far. The police station currently has over 70 reviews, with 4.3 stars.