'Chandramukhi 2' has been officially announced by filmmaker-actor Raghava Lawrence who will be featuring in the lead role with P. Vasu on the director's chair.

The 2005 film Chandramukhi was a sensational hit when it released. The film was remade in Hindi and Kannada which were also successful within their respective sections of the audience. Now, it is confirmed that a sequel to the 2005 film titled Chandramukhi 2 is in the works. This time around, filmmaker-actor Raghava Lawrence has been roped in to play the lead role in the film. The actor took to his Facebook account recently and shared a heartfelt note expressing his excitement to be working in Chandramukhi 2. 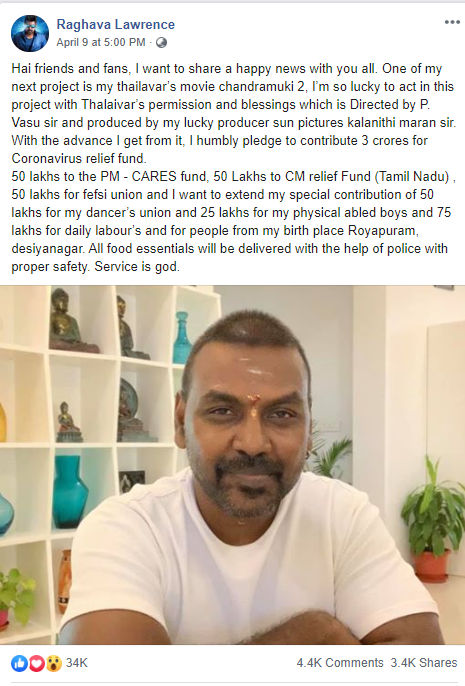 The actor shared that he is happy to announce the film Chandramukhi 2 as it has been greenlit only after the permission and blessing of Thalaivar Rajnikanth. The sequel film will be helmed yet again by the P. Vasu who has an extensive body of work in the South Indian film industry. Along with the announcement of his next film, Raghava Lawrence also shared that he will be pledging support to various organizations working towards the coronavirus outbreak relief and providing support to people in need.

Raghava Lawrence has a number of project lined-up. The former dance choreographer tuned actor-filmmaker is also making his Bollywood directorial debut with the film Laxmmi Bomb. The film will star Akshay Kumar and Kiara Advani in the lead role. The film will be an official remake of Raghava's original Tamil film series titled Muni.

Navratri is about bowing to the inner goddess and celebrating your limitless strength.On this auspicious occasion,I am sharing with you my look as Laxmmi.A character I am both excited and nervous about... but then life begins at the end of our comfort zone...isn’t it? #LaxmmiBomb pic.twitter.com/TmL9U1OXdk

Bringing you one bomb of a story,#LaxmmiBomb starring @Advani_Kiara & yours truly!Bursting in cinemas on 5th June,2020ðŸ’¥
Fox Star Studios Presents
A Cape of Good Films Production in association with Shabinaa Entertainment & Tusshar Entertainment House
Directed by Raghava Lawrence pic.twitter.com/vlXyK4HkNE

Also read: Rajinikanth to be a part of sequel of Chandramukhi? A.R Murugadoss speaks up

PEOPLE HAVE PLEDGED SO FAR
LATEST NEWS
View all
2 hours ago
Priyamani's birthday: From 'Raavanan' to 'Golimaar', the best performances of the diva
4 hours ago
Kerala elephant death: Trisha, Amala Paul and Manju Warrier express grief
4 hours ago
Basu Chatterjee passes away: Bengali movies of the filmmaker you can watch
6 hours ago
Mohanlal leaves behind Mammootty to become the highest-paid actor of Malayalam cinema?
3 hours ago
Nayanthara looks regal as stills from her film 'Mookuthi Amman' go viral; See pics