Himanshi Khurana and Asim Riaz have been together since January. She recently took to her Instagram story to reveal that she is sad. Read to know the reason.

Punjabi singer and actor Himanshi Khurana has been making headlines since she confirmed her relationship with Asim Riaz. Himanshi is also quite on social media as she frequently lets her fans know of her whereabouts. Recently, she took to her Instagram stories to let her fans know the reason she is sad and it was not because of her relationship problems. Read ahead to know what is the cause of Himanshi Khurana's sadness.

Also read | Malaika Arora Talks About How Sunday Should Look Like, Shares Picture From Her Goa Trip

Himanshi Khurana lets her fans know that she is sad

Himanshi Khurana uploaded an Instagram story wherein she let her fans know the cause of her sadness. She revealed that hair loss in the prime of her age is the reason she is sad. The story read as 'People automatically assume its a relationship problem whenever you're sad, like no, bhari jawaani mein baal tuut the hai mere.' 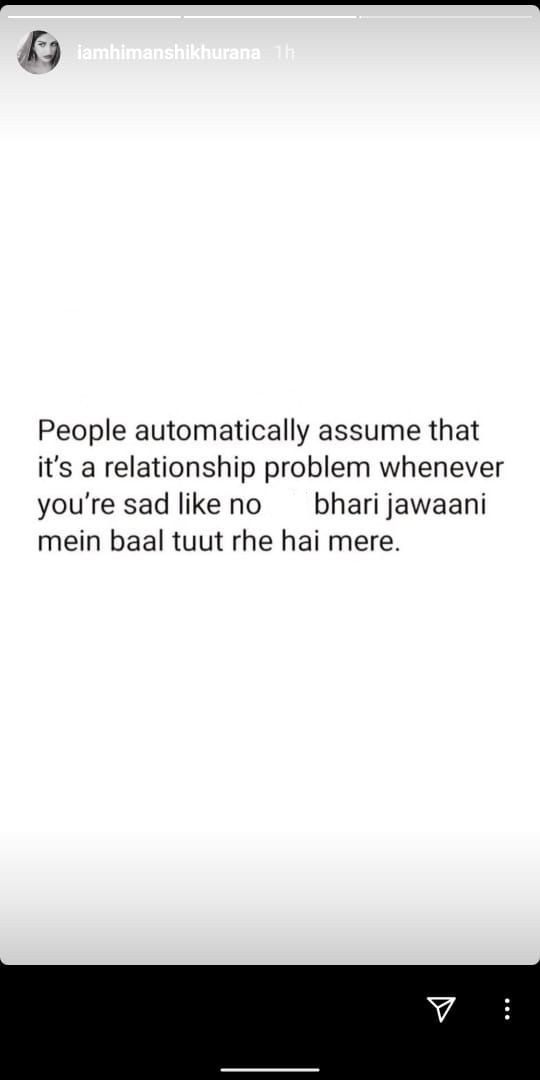 On a reality show, Asim Riaz proposed Himanshi Khurana. He also took her home to meet his parents. According to the year wrap by Twitter, Himanshi Khurana was the most-mentioned music artists of India. S Thaman and Armaan Malik ranked second and third respectively.

Also read | If You Loved 'Tum Hi Ho', Here Is A List Of Other Songs Composed By Mithoon