The Malayalam cinema actor Mammootty was recently seen in a new picture on his Instagram. In the picture, he can be seen with his wife, Sulfath Kutty

The Malayalam actor Mammoott's recent picture on Instagram created quite a stir. In the picture, he can be seen with his wife, Sulfath Kutty. The actor has a huge fan base and fans were in awe seeing the cute picture.

The picture was posted by Wings Media, who were the photographers of the picture. Mammootty can be seen in a denim shirt and jeans. He had his beard grown well. He added a black and silver watch to his look. On the other hand, Mammootty's wife wore a black Indian attire. The post was captioned as, ‘No Caption.’ Fans loved the picture of the cute couple and commented saying, ‘The King & Queen.’ 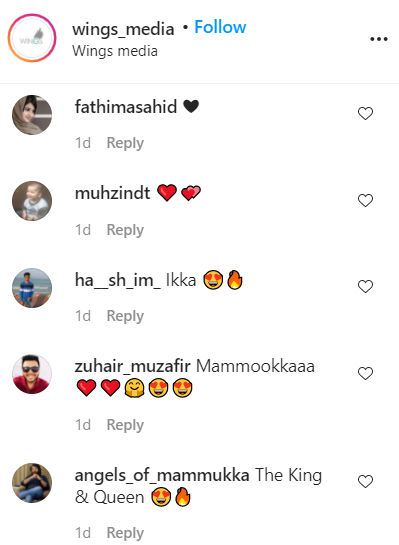 Mammootty tied the knot with Sulfath Kutty on May 6, 1979. It was an arranged marriage. The couple has been blessed with two kids, a daughter and a son.

Mammootty predominantly works in Malayalam cinema. His career spans over four decades, and he has appeared in more than 400 films. Besides Malayalam cinema, Mammootty has also worked in Tamil, Telugu, Kannada, Hindi and English movies.

He made his debut in Tamil cinema in 1990 with film Mounam Sammadham. His Telugu debut came with the film Swati Kiranam in 1992. He has done Bollywood films such as Triyathri and Dhartiputra. He has also acted in an Indo-English film called Dr Babasaheb Ambedkar.

Also read: Do You Know Mammootty Was 'rejected' By Most Filmmakers During Early Days? Here's Why

Mammootty will soon be seen in Bilal. It is a Malayalam action-drama movie, directed by Amal Neerad. The movie casts Mammootty and Dulquer Salmaan in lead roles. Bilal is a sequel to the blockbuster movie Big B. The film will premiere on Netflix, mostly by mid-2021.

Another upcoming film of Mammootty is The Priest. The poster of the film was recently released on social media and went viral in no time. In the poster, Mammootty can be seen in a well-grown beard, black coat and a black hat along with specs. The film is slated to release in the mid-2021.