Prithviraj Sukumaran took to his Instagram to share a picture with Asif Ali on the occasion of his 35th birthday. The actors have worked together in the past.

South Indian actor Prithviraj Sukumaran took to his Instagram to wish Asif Ali. In the picture, the two stars are standing with folded arms while looking at the camera. The caption of the post reads, "Happy birthday @asifali [emoji]". The comment section is filled with birthday wishes as well as heart eye emojis. The post has around 100k likes within two hours of the upload. 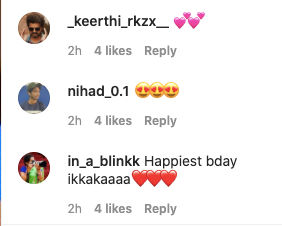 Both the actors have worked together in various movies like Double Barrel in the year 2015. The movie was written and directed by Lijo Jose Pellissery. It also stars Indrajith Sukumaran, Arya, Chemban Vinod Jose, Sunny Wayne, Swathi Reddy, Isha Sharvani, Parvathi Menon, and Rachana Narayanankutty. They also worked together in the 2014 movie Sapthamashree Thaskaraha. It is a comedy movie directed and written by Anil Radhakrishnan Menon.

Who is Asif Ali?

Asif Ali is celebrating his 35th birthday today. The actor works mainly in Malayalam cinema. He made his debut with Shyamaprasad's 2009 film Ritu. Through the years, he has delivered various commercially successful movies like Apoorvaragam, Traffic, romantic Comedy film Salt N' Pepper and Period drama Ozhimuri. The period drama was selected in the Indian Panorama section of the 43rd International Film Festival of India. In 2013, he gave a hit film titled Honey Bee. In 2015, his film Nirnayakam won National Film Award for Best Film on Other Social Issues.

In 2015, he made his debut as a producer with the movie Kohinoor. His production house was named Adam's World of Imagination. Apart from this, he also produced the 2016 film Kavi Uddeshichath. He also worked in the 2016 film Anuraga Karikkin Vellam, 2017 movie Sunday Holiday, Btech (2018) and Vijay Superum Pournamiyum (2019).

Also Read: As Silambarasan celebrates his 38th birthday, here's a list of his popular movies so far

Asif was born Karikode, Thodupuzha, Idukki on February 4, 1986. He graduated from the Marian College, Kuttikkanam in Business Administration. He is married to Zama Mazreen. The actor recently shared his look from his upcoming movie Kuttavum Shikshayum (Crime and punishment). He is playing the role of a cop named CI Sajan Phillip. The movie will also feature Sunny Wayne, Alencier Ley Lopez, Sharafudheen, and Senthil Krishna. It is written by Sibi Thomas. On the work front, he is finishing up his upcoming movies Rachiyamma, Ellaam Shariyaakum, and Parannu Parannu. Take a look at his post.

Also Read: Movies to watch on Netflix in February; 'To All The Boys', 'Inception' and more