Raadika Sarathkumar's daughter Rayane took to Instagram to give a detailed account of her baby's health from the day she was born. Read to know more.

Tamil actor Raadika Sarathkumar is on cloud nine as she recently became a grandmother to a baby girl called Radhya. Raadika's daughter Rayane Mithun took to Instagram to share a detailed and emotional account of Radhya’s health since the time she was born as a premature baby. Read ahead to know more.

In the caption of the post, Rayane has described her daughter Radhya as a ‘miracle’. Giving a detailed account on the little munchkin's health Rayane wrote that she was born at 31 weeks and weighed only one kg. She was also breathing with a help of machines for a month and also experienced seizures. Radhya also had several tubes and machines attached to her. Rayane also wrote that one could count every bone in her body as she was very thin.

To add to all these issues, Radhya was born right before the lockdown due to the coronavirus pandemic was imposed. She also has written that the doctors taking care of her baby also gave her hope and took things ‘one day at a time’. In the end, she wrote that her daughter is well now and ‘being the boss baby that she is’. Rayane Mithun also shared a photo of her daughter from the time she was undergoing treatment.

As soon as Rayane uploaded the emotional post, netizens have commented on all sorts of encouraging words for both mother and daughter. One user has commented, ‘Radhya is a fighter and a miracle as well’ while another said, ‘Cheers to you strong momma and the strongest fighter’. See their reactions below: 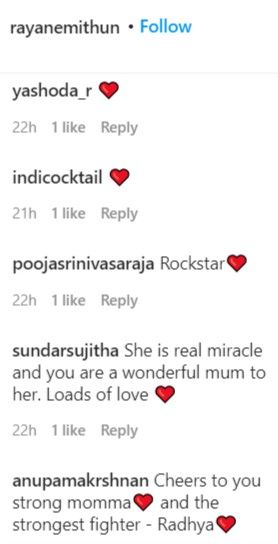 Raadika Sarathkumar's daughter got married to cricketer Abhimanyu Mithun in 2016. They also have a son called Tarak. Rayane Mithun's Instagram is full of pictures of her children and the fun time she has with them.

Raadika has starred in over 300 films in her acting career. Some of her notable works are Neethikku Thandanai, Poonthotta Kaavalkaaran, Thanga Magan and Keladi Kanmani. She has won several awards for her performance in many of her films. She also was a part of several Hindi films like Asli Naqli, Naseeb Apna Apna and Mera Pati Sirf Mera Hai.