On Swwapnil Joshi's Birthday, Here's Glimpse Of Adorable Moments He Shared With His Kids

It is Swwapnil Joshi's birthday today. As he turns 43 years old, here is a look at some of his adorable moments with his kids that he has shared on Instagram.

Swwapnil Joshi is a well-known face in the world of Marathi cinema where he has consistently made his mark over the past several years. He is also a doting father of two adorable kids, Raghav and Maayra and like most other actors, he too is an avid user of certain social media platforms. Fans have been lucky enough to be able to have a look at some of Swwapnil Joshi's photos via platforms like Twitter and Instagram in the recent past. It is Swwapnil Joshi's birthday today and as he turns 43 years old, here is a recap of some of the moments with his children that we have been fortunate enough to see via his Instagram.

Swwapnil Joshi's Instagram particularly has seen a lot of cute moments of his kids lately, which is the most precious thing ever. His fans too, seem to be in great admiration of their photos and the bond he holds with his children. On September 30, 2020, Swwapnil Joshi took to his Instagram to post a very joyous picture of him and his beloved son Raghav having a good laugh while captioning it, 'Father & Son Best friends for life !'

Swwapnil Joshi's message to his daughter

Along with Raghav, Swwapnil Joshi also has a daughter named Maayra Joshi. The actor posted an adorable picture of Maayra on his Instagram on the occasion of Daughter's Day this year. He captioned the photo with a short message dedicated to his daughter. He called her 'brave' in the message and said he hopes she will follow her dreams as he believes she deserves them as much as they deserve her.

Hey little one You are brave in a way I have no words for and so are your dreams I hope you go for them brave girl I hope you believe in yourself with your entire being and in the times of turmoil I hope you rise above and never settle There are gonna be many obstacles in your path Let them strengthen you, humble you but never lose your spark Follow your dreams with great zest and enthusiasm because you deserve them and they most definitely deserve you #HappyDaughtersDay little one â¤ï¸ PC : @pricelessmomentsphoto #daughtersday #fatherdaughter

Also Read: Apart From Movies, Marathi Actor Swwapnil Joshi Has Been A Part Of THESE Reality Shows

Even though he seems to say that his happiness comes in just a box, Swwapnil Joshi's Instagram has lately had a plethora of joyous moments as he has graced us with beautiful photographs of his kids. The actor posted a raw and random moment he captured of his two children playing while sitting inside a cardboard box on September 15, 2020. He simply captioned the picture 'Happiness in a box'.

A lot of Swwapnil Joshi's photos on his Instagram are of his son and daughter. He has even managed to give us some Sunday inspiration via some pictures of his kids lately. On October 11, 2020, he posted a picture of his children sitting next to each other looking mischievous and captioned it 'How an ideal Sunday looks like!'. Similarly, on September 13, 2020, he took to Instagram to show how his son was spending his Sunday and captioned the picture 'Sunday - ing like a pro !'. 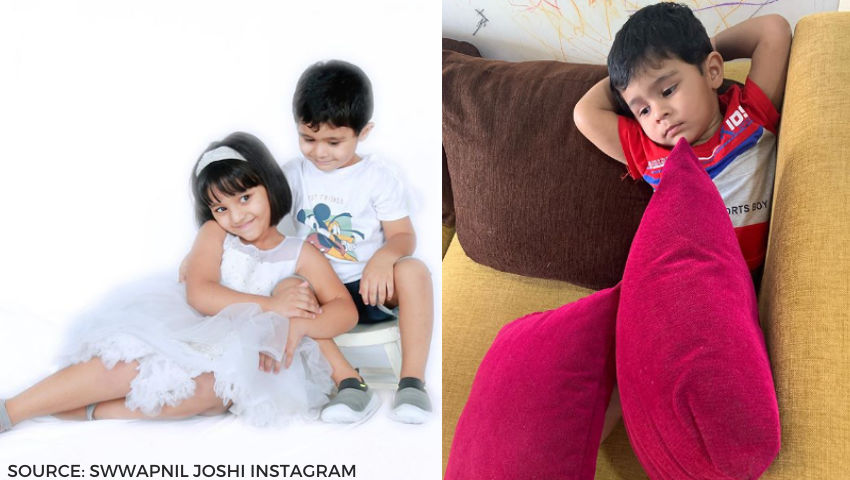 Also Read: Swwapnil Joshi’s Movies That Are Streaming On Amazon Prime; From 'Tu Hi Re' To 'Laal Ishq'

WE RECOMMEND
4 months ago
Swwapnil Joshi stuns fans with his latest 'Salt and Pepper' look; Check out