Hina Khan is all set to make her third appearance in the Bigg Boss 13 house. Hina also shared a sneak peek on her social media handle. Continue reading

Bigg Boss 13 is nearing to its finale and fans are anticipating as who will be declared the winner. Recently, former Bigg Boss contestant Hina Khan shared a picture on her social media account. Although Hina Khan could not win the trophy in Bigg Boss 12, she gained a lot of popularity. During the 13th season of Bigg Boss, Hina Khan has appeared on the show about twice and is all set to make her third appearance soon.

Also Read: Sara Ali Khan Reveals THIS Is The One Common Quality That All Of Her Co-actors Have

Previously, Hina Khan appeared on Bigg Boss 13 along with Priyank Sharma in order to promote their song Raanjhana. After that, she entered the house to declare the winner of the Elite Club. Currently, it is being reported that Hina Khan will once again be entering the Bigg Boss house for a task. The Hacked actor took to her social media account to share a sneak-peek of her look from the show.

In the pictures, Hina Khan is sporting a white top which is neatly tucked under her pink pants. Hina also shared two boomerang videos on her Instagram story. She also recorded a video from her car as she was on her way to the Film city and she captioned the video that she is going to meet some amazing people who are locked inside the house.

Check out the pictures below 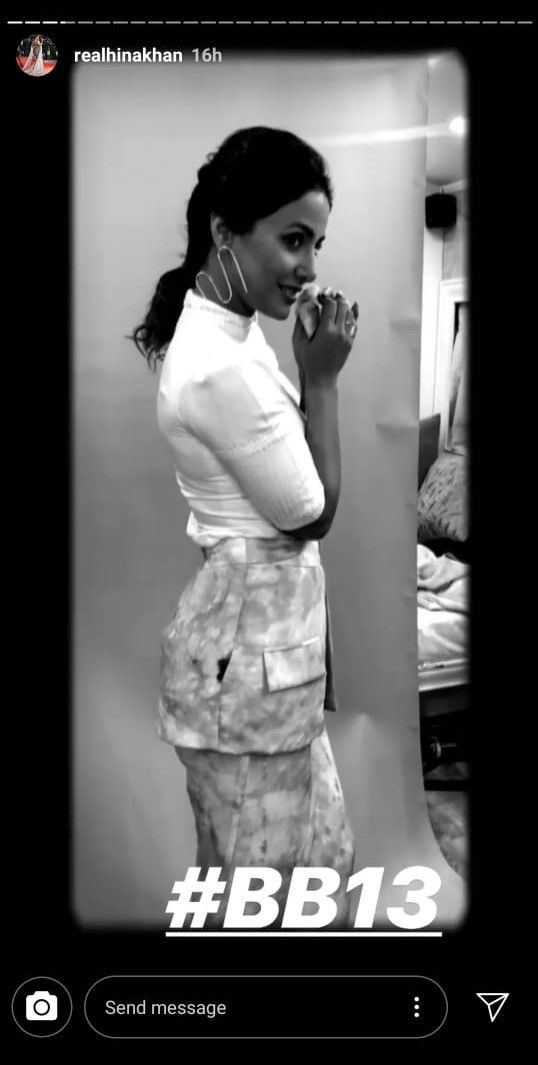 This Weekend Ka Vaar, Madhurima Tuli was evicted from the house because of her violent and aggressive behaviour with her ex-boyfriend Vishal Aditya Singh. She hit him with a frying pan. In the recent episode, Sidharth Shukla will be seen getting violent with Asim Riaz.

Also Read: Selena Gomez's 'RARE' Tattoo Is A Hint To Her New Album? Check Out The Pictures

PEOPLE HAVE PLEDGED SO FAR
Kundali Bhagya Written Update February 25: Mahira blackmails Karan to marry her
Why is 'Criminal Minds' ending? Was the show cancelled?
Surbhi Chandna and Gaurav Chopra's pictures prove that they're the ultimate BFFs
Why did Adam Levine leave 'The Voice'? What exactly happened to him?
Why is 'Blue Bloods' a rerun tonight? Everything you need to know about the episodes
DO NOT MISS
DELHI VIOLENCE TIMELINE
'DELHI VIOLENCE AN INTEL FAILURE'
IT MIN MEETS MICROSOFT CEO
AADITYA DEMANDS APOLOGY
INSPIRED OR COPIED?
CAT'S REACTION AMUSES TWITTER