A video clip has surfaced on the internet in which Sidharth Shukla is allegedly seen behaving violently towards Shehnaaz Gill. Here's how Shruti Seth reacted.

Sidharth Shukla and Shehnaaz Gill’s equation in the Bigg Boss 13 house is loved by all fans of the show. However, things do not seem to look fine between the duo lately. Shehnaaz Gill recently suffered a panic attack in the house and was seen hitting herself as Sidharth provoked her. Ever since then, the two haven't been on talking terms.

In the recent episodes, Sidharth Shukla is allegedly seen behaving violently towards best friend Shehnaaz Gill. The footage has gone viral and fans and many celebs did not like Sidharth’s behaviour. The video sees Sidharth pinning down Shehnaaz and holding her hands forcibly in the garden area. He is also seen asking Shehnaaz to behave appropriately with him. Shehnaaz is seen crying bitterly asking him to release her. Check out the clip below.

If this is not Harrassment than What is. You can clearly see this Abuser thukla put his leg on her stomach and twisting her hands. No sane woman would tolerate such humiliation on national Telivision. @BiggBoss @ColorsTV @mnysha #BB13 #BiggBoss13 #BiggBoss pic.twitter.com/R7ISMYyuCl

Taking to Twitter, actor Shruti Seth slammed Sidharth Shukla for his violent behaviour. The tweet is nowhere to be seen on her Twitter profile anymore. Maybe the actor has deleted the tweet. However, some online portals have a screenshot of Shruti's tweet against Sidharth Shukla. This is what she wrote.

What the hell is this??? Why are we promoting this kind of barbaric violence in the name of entertainment? This man needs professional help @ColorsTV. 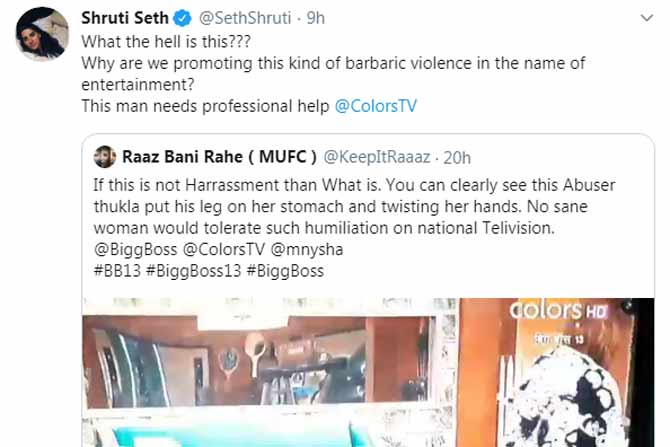 Shehnaaz and Sidharth's changing equation has left the netizens divided. Many celebrities including Gauahar Khan and others took to Twitter to criticize Sidharth. However,, fans of the actor have come forward to support him too. They are using #ApologizetoSidharth on micro-blogging site to stand by him and condemn people who shared the video clip.

Yes only if she doesn’t go back to him sayin aaaah aaaaah aise kyun Attitude de raha hai ???? Then I will respect her ! But if she’s really hurt n goes back to saying shukla kuch bhi karle main uske saath hoon , then I’m sorry ! In any case the moral compass of this season is ðŸ˜¶ https://t.co/L7DuSNceHW

This man should have been evicted the first time he initiated violence against a co-contestant. But rather than showing him the door, @ColorsTV projected his violence as a mere reaction to the "provocation" by other housemates. This is what you get by enabling an abusiver. Shame. https://t.co/tjfOfpB3u5

Don’t forget the trend!
Umar riAz is a great artist
He is a TED speaker.
He is a doctor.
Aur hum aur tum sab gawar kahin keh. Likteh bhi Hindi main on a English-English platform!#ApologizeToSidharthShukla

Very deeply hurt.the most imp thing these people are reacting on the basis of that particular clip which was small part of whole episode and on that basis all these intelligent people use such a bad lang for sid that was most disgusting.#ApologizeToSidharth