Paras Chhabra may be seen getting close to Mahira Sharma while inside the Bigg Boss 13 house, but reportedly, he has a girlfriend, Akanksha Puri, who is waiting for him to come out of the Bigg Boss house. As per Paras's revelations on the show, his and Akanksha's equation has gone through a rough patch and he had apparently broken up with her before he entered the house. However, Akanksha has been supporting Paras all throughout.

Akanksha has now shared something on Instagram which has got fans wondering if she has moved on from her relationship with Paras Chhabra. Taking to Instagram, Akanksha Puri posted a picture on her story where one can see a bouquet of red roses and a red teddy bear lying on her bed. Akanksha Puri wrote, “Happiness is when you come back home to this” on her story. Who sent her the Valentines’s day goodies is not confirmed yet. Fans are speculating that it can either be a lover or a fan.

Have a look at Akanksha Puri’s story here: 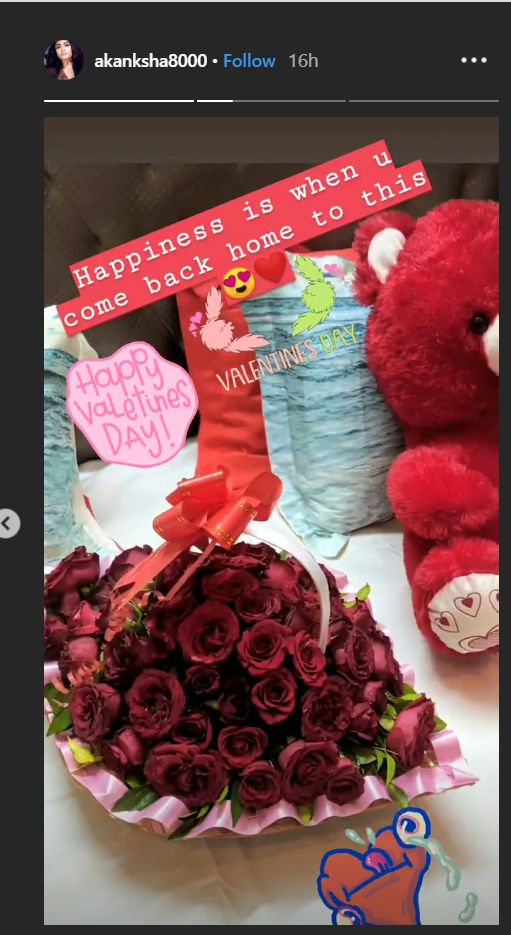 For the uninitiated, Akanksha Puri and Paras Chhabra were in a relationship for three years. However, things changed between the duo when Paras Chhabra entered the Bigg Boss 13 house. Fans have seen Paras Chhabra share a strong bond with Mahira Sharma in Bigg Boss 13. Although the duo says that they are only friends, they've made it obvious that they like each other romantically too.

Paras was also seen claiming on the show that he wanted to leave Akanksha Puri. However, she did not want the same. In the family week, Paras’s mother was seen warning him about the game. She also was seen saying that “36 aayengi, 36 jaayengi, teri waali teri maa hi laayegi”. Paras Chhabra was also seen claiming that Akanksha Puri is the one who has been clinging on to him despite his resistance.

Bigg Boss 13 has reached a crucial stage as the finale of the show is nearing. All the contestants in the Bigg Boss 13 house are giving hard competition to each other to win the coveted title. Stay tuned for further updates about Bigg Boss 13 and its grand finale.