Carryminati has come forward and refuted the rumours of joining the reality TV show hosted by Salman Khan 'Bigg Boss'. Read below for more details -

Yesterday, Koimoi initially reported that Caaryminati aka Ajey Nagar will be joining the latest season of Bigg Boss, after which many reports of similar nature started doing the rounds on the internet. This also resulted in a meme wave where people trolled him for joining the show he has made roast videos about. The news about Carryminati joining the Bigg Boss house led to an outpour of reactions which have now been clarified by the YouTuber.

The same report suggested that CarryMinati had travelled to Mumbai in order to get quarantined before joining in the filming of the latest Bigg Boss season. For a few days, Carry had not been showing his face during his gaming live streams which fueled the fire even more. However, as soon as CarryMinati started off his live stream yesterday playing the Fall Guys game, fans couldn't help themselves from spamming his chat with questions about Bigg Boss. 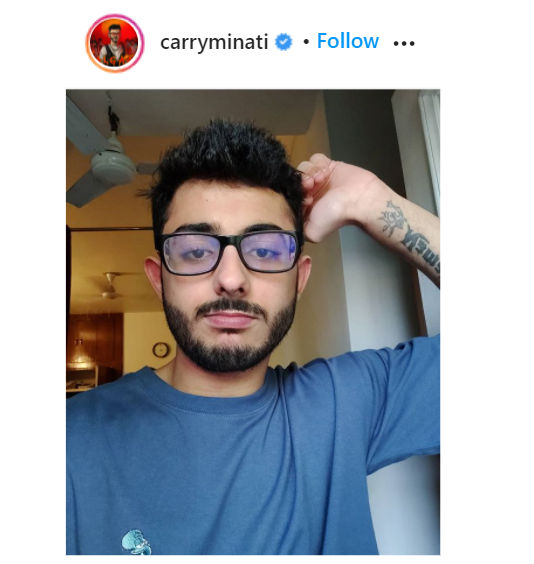 CarryMinati enjoys lakhs of viewers every time during his live stream on his second channel titled 'Carry is Live'. This time around, fans were interested in knowing whether the YouTuber has given in and participated in the show he has brutally roasted in the past. The YouTube sensation has denied being a part of the show and actually ended up answering the same question over and over as fans wouldn't stop asking it. Check out a clip from his live stream below -

Those who are saying that @CarryMinati is going in #BiggBoss14
Here you go!#carryminati #BiggBoss pic.twitter.com/wfVwxcyXNH

Carry first received a comment by a fan who wrote that the YouTuber is too cool to be a part Bigg Boss. Carry, keeping his sarcastic live streaming persona alive replied back saying that he is very sorry to have hurt a fan but he is not going in the Bigg Boss fan. The messages kept flocking in and the YouTuber then almost paused his gaming and cleared the air stating that he is not going to be a part of the latest Bigg Boss season.

This won't be the first time Carryminati has been associated with the reality TV show. Back in 2017, the YouTuber was firstly rumoured to be joining Bigg Boss. For the current season, it is expected that the contestants will include a mix of television, reality and internet stars.