Charu Asopa took to Instagram to share a heartfelt birthday note for sister-in-law Sushmita Sen. Read ahead to know what she wrote for her.

Sushmita Sen is one of the most versatile actors in the industry. She has also inspired many people with her motivational speeches and interviews. She rings in her 45th birthday on November 19. Her sister-in-law Charu Asopa has penned a heartwarming note for the actor’s birthday. Read to know what she said in her post.

Also read | Who Is Seahorse On The Masked Singer? Fans Begin To Speculate

Charu Asopa took to Instagram to share a heartwarming birthday post for her sister-in-law Sushmita Sen. In the post, she endearingly called Sushmita ‘didi’. She also wished her all the happiness in the world. She mentioned that family get-togethers are fun with Susmita around. Charu also added that she looks forward to catching up with her as well. Charu Asopa married Sushmita Sen’s brother Rajeev Sen in 2019.

Charu Asopa’s Instagram is full of pictures and videos from her personal and professional life. Rajeev Sen also frequently makes it to Charu Asopa’s Instagram. She is known for her roles in the television serials Mere Angne Mein wherein she played the role of Preeti and Jija Maa. She is also going to star in the serial Akbar Ke Birbal wherein she played the character of Taara Bai.

Sushmita Sen’s birthday was celebrated at home by her daughters Renee and Alisah. The former Miss Universe shared pictures of the celebration on her Instagram. In the pictures, it is seen that her bedroom was decorated with pink, white and golden balloons. Her fans and followers also poured in birthday wises for the Main Hoon Na actor. See their wishes here: 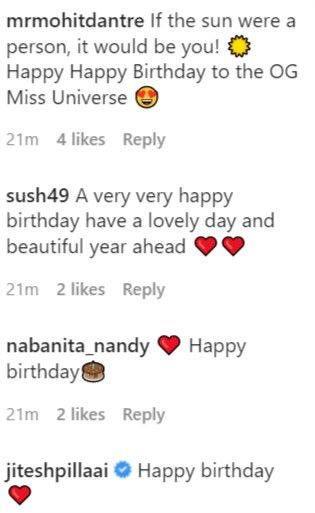 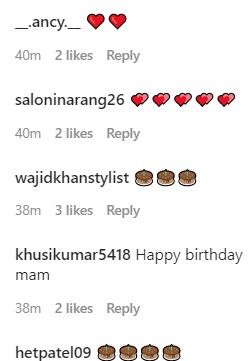 Sushmita Rose to fame when she won the Miss Universe crown in 1984. She was 18 years old at the time. Some of her notable works in movies are Vaastu Shastra, Maine Pyaar Kyun Kiya?, Ram Gopal Varma Ki Aag and Biwi No.1. She also has won many awards and accolades for performances in films.