If Not Acting, Divyanka Tripathi Dahiya Would Have Chosen THIS Alternative Career Choice

Divyanka Tripathi was always a good student in school, and before pursuing a career in acting, the actor's alternate career choice was to become this, Read on-

Divyanka Tripathi is most popular for her character as ‘Ishi Maa’ in ‘Yeh Hai Mohabbatein’ (YHM). YHM was one of the top TRP rated shows when it was airing on Star Plus. Divyanka garnered a lot of accolades for her performances. But to reach this point the actor did a lot of hard work and showed dedication.

In fact, Divyanka Tripathi is one of those actors who has delivered some fantastic works in her career so far. Although achieving so much success in TV, the star was once asked about her alternate career choice. Check out her answer-

In an interview with a leading daily once, Divyanka Tripathi revealed that she never wanted to become an actress. Rather, she wanted to be an army officer. She admitted that she was good at NCC, and was told that she was one of the best cadets among all the others.

Divyanka Tripathi mentioned in the interview that this designation was given to her when she was involved in a Republic Day Camp in her school. Adding to it, she also revealed that she was a very good rifle shooter, but she doesn't get to practice much now. She thinks that she can still shoot well. So, Divyanka Tripathi revealed that her alternative career choice would have been to become an army officer. 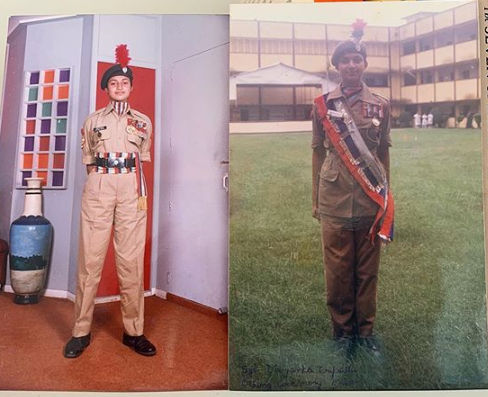 Divyanka Tripathi began her acting career in television serial Banoo Main Teri Dulhan. Post Yeh Hai Mohabbatein, Divyanka Tripathi also appeared in the eighth season of Nach Baliye with her husband Vivek Dahiya. She emerged as the winner of that season. The actor is also very famous for her style files and fashion statement. Her husband Vivek Dahiya is an equally popular actor in the TV industry.

A post shared by Divyanka Tripathi Dahiya (@divyankatripathidahiya) on Jul 10, 2020 at 1:35am PDT

Divyanka Tripathi Dahiya was also appreciated for her acting with accolades like Indian Television Academy Award for Best Actress in Drama Category and the Most Entertaining Actress in Lead Role and many more awards. The actor also made her debut on the digital platform, with the show Coldd Lassi Aur Chicken Masala. Here are some of her pictures in which you see Divyanka in the NCC uniform in school. Take a look at this picture and Divyanka's heart-touching caption-

A post shared by Divyanka Tripathi Dahiya (@divyankatripathidahiya) on May 31, 2020 at 1:53am PDT