Karanvir Bohra in an interview, refused to apologise for sharing the Ramayan meme on his social media claiming that he did not intend to disrespect any God.

After Karanvir Bohra’s Instagram was flooded with comments saying he has disrespected the show and the Gods, the actor decided to clarify his intentions. In an interview, Karanvir Bohra stated that he did not intend to show any disrespect to the show Ramayan. He refused to apologise for the post saying that it was not a dig at the show or its makers.

Karanvir Bohra said that because of his upbringing, he is a devout Hindu. He did not mean to disrespect any Gods with his post. He added that he compared the show to Game of Thrones because he thinks Ramayan is an epic war series of his time as Game of Thrones is now. He also added that in olden times people thought Ramayan was brilliant as they did not know anything better. 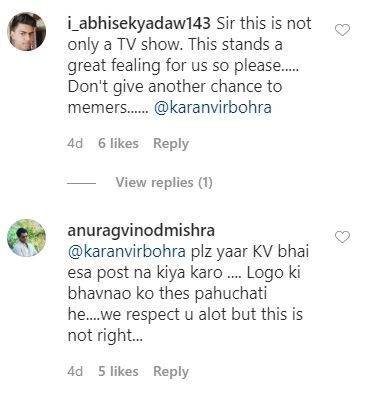 Karanvir Bohra took to his Instagram and posted the meme after he noticed a man dancing in the background rather than fighting a war. The soundtrack played during the video was the song Chogada Tara from the movie Loveyatri. In the 1987 series of Ramayan, the man dressed as a soldier was supposed to engage in combat with the opponent. However, it looks like the man is dancing with his opponent during the war.

Karanvir Bohra took to his Instagram and posted the video while comparing it to the popular television show Game of Thrones. While posting the video, he wrote, ‘I had to post this and we used to think, what an epic war they created, just like @gameofthrones’. [sic] Fans of the actor have commented on the post with many laughing emojis. The Ramayan meme is a viral meme that was posted on the internet earlier this week. The Ramayan meme is reportedly titled Aaj Hum Dandiya Khelenge. Aaj Hum Dandiya Khelenge video has gone viral, with social media users going gaga over the funny meme.