Actors Kartik Aaryan and Janhvi Kapoor will feature together in 'Dostana 2' next year. Now, both the stars have indulged in a funny banter on Instagram.

Kartik Aaryan evidently had an amazing 2019 with both of his releases turning out to be commercially successful. The actor's latest release Pati Patni Aur Woh released on December 6, 2019, and is still running strong at the box office. The film has collected over Rs. 75 crores at the domestic box office. The actor now posted a BTS video from the sets of Pati Patni Aur Woh where the cast Kartik Aaryan, Bhumi Pendekar and Ananya Pandey are seen dancing on Ankhiyon Se Goli Maare. Kartik's co-star from his next film Janhvi Kapoor was quicky to leave a quirky comment on the post which ended up in the two indulging in a funny banter. Check it out below:

Also read: Ananya Panday revelas THIS is the reason for great chemistry with co-star Kartik Aaryan 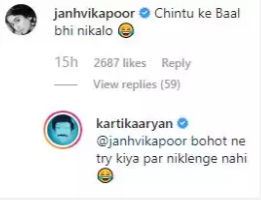 The video shared by Kartik Aaryan features him in a dance sequence along with the two leading ladies of the film. The actor is seen playing with their hair and eventually removing a bunch of their hair strands as a joke. Janhvi was quick to comment that Chintu Tyagi, the character played by Kartik Aaryan in Pati Patni Aur Woh should have also had his hair removed, to which Kartik commented saying that he did try to do it, but turned out to be unsuccessful. The two stars are all set to feature in Dostana 2 which began its production in November 2019. The romantic-comedy film will release in 2020, no official date for its release has been revealed yet.