Kushal Tandon was vocal and very straightforward with his words while talking about TikTok. He shared an intriguing message regarding the same. Read.

The coronavirus pandemic has taken a toll on the lives of many. With the national curve is away from flattening, the cases are over 13,000 in the country. While there are over 400 people who have succumbed to the virus, there are thousands in the country who are still under treatment and observation. Kushal Tandon, a popular television actor, believes that ‘the root of all problems is China’. He took to Instagram to express his opinions about Chinese origin TikTok, and made remarks on people using TikTok.

In the latest post that Kushal Tandon uploaded on his Instagram, his one million and counting followers could see that Kushal is ‘angry’ with the situation. He referred to the usage of TikTok for people who are ‘jobless and have nothing to do’. His called out on the people still indirectly providing revenue to the Chinese owners of TikTok just by using the application.

Kushal Tandon wrote, “While the whole world is f***ked coz of China b***h, but still guess what are Indians and many others are giving them the revenue from sh*t #TikTok. While China made Tik Tok for people who were useless and who had nothing to do, and look at us all... haha, everyone is in Tik Tok, ban Tik Tok... proud of never using this sh*t Tik Tok, ban Tik Tok.” His post radiated the amount of anger in him and also expressed his thoughts on the widespread usage of TikTok in India. He also mentioned the banning of TikTok in India in his caption. 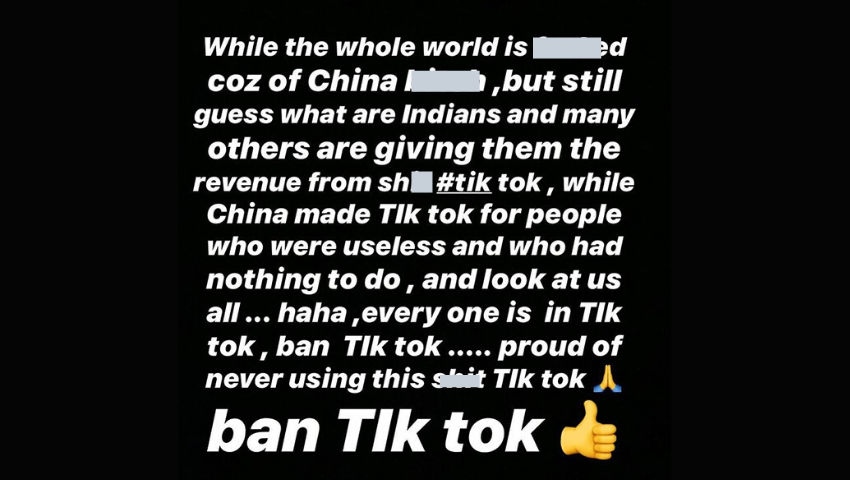