'Naagin' actor Sharad Malhotra went live on Instagram to thank his fans who wished him on his birthday and made it extra special for him. Read ahead

Naagin actor Sharad Malhotra was delighted to share his birthday festivities with his fans as he went live on Instagram. The actor who has a massive fan following took to Instagram to go live and thank his fans for all the birthday wishes that he received. Sharad Malhotra, along with his wife and furry pet, came live on Instagram for close to 20 minutes and interacted with the fans.

Taking to Instagram, the actor came live as he was seen seated on a chair with a balloon in the background. After a few minutes of delay, Sharad Malhotra comes on screen and greets fans. A number of people joined this live stream and the actor was delighted to see the response he was getting at the time. A few days back, the cast and crew of Naagin too celebrated his birthday on the sets of the show. Videos from the celebration were shared online where the cast was seen rejoicing as they celebrated Sharad’s birthday. In the same way, fans too had been sending the actor a number of wishes. Since the actor was caught up with his work, he eventually made time to go live on social media and personally thank his fans for the wonderful wishes that they sent him.

Also Read | On Sharad Malhotra's Birthday, Take This Quiz To Find Out How Well You Know Him 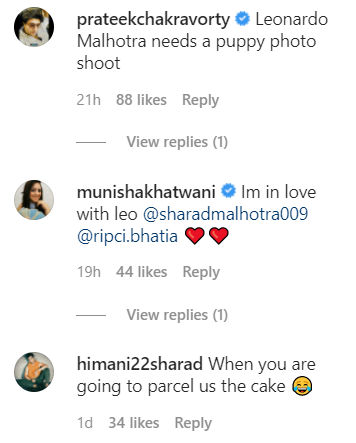 Upon going live on the platform, Sharad Malhotra began by thanking fans for the wonderful messages that they sent him. He also expressed how he did not expect so much love from the fans and that he is humbled to get such a great response. A few moments later, he announced that he will interact with a few fans online and thus began reading a few comments that were posted during the live session. He was later joined by his pet dog whom fans found extremely cute. After posting the IGTV live session on Instagram, a number of followers suggested that Sharad Malhotra should create an Instagram account for his pet dog. In the stories as well, the actor was thankful for the wonderful wishes sent to him by his friends and followers and thus wrote a vote of thanks for them as well.

Also Read | Surbhi Chandna Dances Her Way Out Of 2020 With 'Naagin 5' Cast, Posts A Video On Instagram